A classic car restorer died in a frozen pond after diving in in a bid to save his dog, it was revealed today.

Tim Waddingham, 53, leapt into the freezing waterÂ near the Wildwood Golf and Country Club in Cranleigh, Surrey, on Sunday afternoon.

Mr Waddingham, a classic car restoration expert from Rudgwick, in West Sussex, was overcome by the cold and drowned – while his pet dog managed to scramble free. 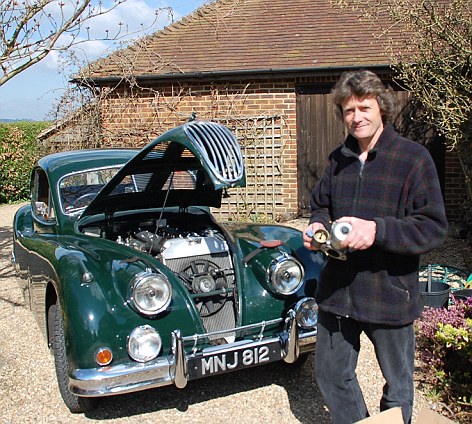 Tim Waddingham, 53, died after trying to rescue his dog in a lake on a golf course in Cranleigh, Surrey. His body was later discovered by police divers 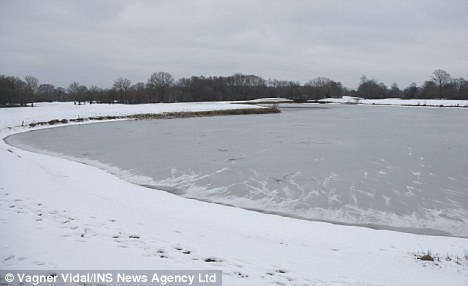 Frozen scene: The lake at the Wildwood Golf and Country Park in Cranleigh, Surrey where Mr Waddingham drowned

Police were initially called at 9.17am by a member of the public who spotted the man in â€˜difficultyâ€™ in the water and the manâ€™s family also alerted police that he was missing after the dog returned home without him.

Distraught relatives went out to search for the father and a major rescue mission was launched at the beauty spot after they spotted his body.

Police divers searched for the man at the nine-acre golf course and his body was found in the lake at 4pm – seven hours after he went missing.

A spokesman for Surrey Police said one line of inquiry was that the man had attempted to rescue his dog from the lake at the golf and country club – which costs Â£890-a-year to join – after the dog got into difficulty.

The course is dotted with lakes and has three nine-hole golf courses in its nine acres of grounds – but was closed on Sunday because of the freezing weather.

A member of the prestigious Wildwood Golf and Country Club said today: â€˜No-one here actually knew him – he wasn’t an associate or member of the golf club.

Surrey Fire and Rescue Service and paramedics also attended the incident, but the man was pronounced dead at the scene

A spokesman for the police said today: â€˜A post mortem examination has given the cause of death as drowning. An inquest into his death has been opened and adjourned.â€™

Terry Dye, of the Jaguar Enthusiasts Club, said: ‘Tim raced with us for a couple of seasons back in 1999 and 2000 with a Jaguar XK.

‘He was a very popular guy, quietly spoken but with a lovely sense of humour.’

An air ambulance was scrambled to the scene shortly after the alarm was raised but was stood down when it was realised that the businessman had drowned.

The divers only arrived at 2pm, five hours after the first desperate 999 call.

Tragically Mr Waddingham was walking his dog in a public stretch of the country club, which was closed due to the snow, when he went into the water to ther rescue of the dog.