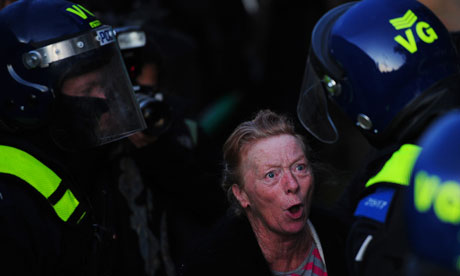 The BBC, ITN and Sky News have been ordered to hand over hours of unbroadcast footage of the Dale Farm evictions after losing a court battle against Essex police.

The broadcasters were told to disclose footage filmed at the UK’s largest Travellers’ camp on 18 and 19 October after police won a production order at Chelmsford magistrates court on Tuesday.

The broadcasters are understood to be considering a challenge to the wide-ranging order, which includes footage of a police officer apparently using a stun gun at close range.

The court ruled that it is in the public interest for police to obtain the footage to help detect crime. In deciding whether to grant a production order, judges are supposed to weigh the interest of the police in obtaining evidence with the public interest in a free press.

Essex police said it believes the footage could help to identify people responsible for “the assault of a number of officers” during clashes with Travellers at the eviction.

It is routine for broadcasters to oppose production orders brought by the police. However, this order was keenly fought because it includes non-violent footage of Travellers which police claimed could help identify those involved in criminal acts at other times during the eviction.

The broadcasters â€“ who include the freelance journalist Jason Parkinson and Hardcash Productions, the independent production firm behind BBC1′s Panorama coverage of Dale Farm â€“ argued that disclosing the material would put journalists in danger at future protests because they could be wrongly seen as an evidence-gathering arm of the authorities.

A spokesman for ITN said: “We are disappointed by this ruling as we opposed the production order to protect our newsgathering personnel and on a matter of journalistic principle. We are reviewing the details of the ruling and seriously considering whether to appeal.”

Essex police said in a statement: “Essex police has been granted the right to obtain relevant footage from those media organisations that were present during the enforcement action in October 2011.

“The material is expected to be handed over to the force in the next few weeks. Detectives will then proceed to identify those individuals who committed crimes at Dale Farm.”