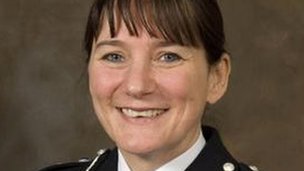 Crime detection rates in Surrey need to increase, but confidence in the police force was high, its new chief constable has said.

Lynne Owens, who started in the role on 1 February, said solving more crimes was one her priorities.

Figures from Her Majesty’s Inspectorate of Constabulary showed that Surrey had one of the lowest rates in the country.

Mrs Owens said the latest figures did not take into account crimes which were detected “informally”.

These were crimes which were resolved without charges being brought or a caution issued, she said.

The figures from Her Majesty’s Inspectorate of Constabulary showed that Surrey Police solved 20.2% of crimes in the year to March 2011, putting them in the bottom three of English forces. The best force, Northumbria, solved 41% of cases.

“What we really need is for the public to engage with us.”