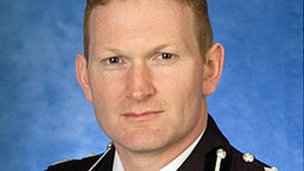 Wiltshire Police’s chief constable will be “greatly missed” when he begins his new job as head of the UK Border Force, Wiltshire Police Authority has said.

Home Secretary Theresa May announced that Brian Moore would step down at the end of February to lead the new body.

The police authority said the current deputy chief would act as chief until a replacement was appointed.

Wiltshire’s Police Commissioner will make the appointment after they are elected in November.

The police authority said it would be one of the first tasks of the holder of the new role.

Chairman Christopher Hoare said: “We are supporting this secondment of Brian Moore to the UK Border Force where he will be engaged in work of national importance.

“We are sure he will make an invaluable contribution, and felt that his skills and experience should be made available in the national interest.

“Brian became Wiltshire’s chief constable in January 2008 and under his leadership Wiltshire has become the safest county in England and Wales.

“We know he will be greatly missed by the public, Wiltshire Police and our partners.

“WPA recognises, and is very grateful for, Brian’s outstanding contribution to the policing of Wiltshire and Swindon.”

Force sacks finance chief over gross misconduct Posted on 27th November 2013
Surrey Police Head of Finance wins appeal over misconduct sanction Posted on 24th December 2013
Head Of Crime Operations â€˜Killed Himselfâ€™ Posted on 17th February 2013
Police chief backs call for a single Scottish force Posted on 17th August 2011
Not another statistic thank you. Posted on 02nd March 2013
Force plans to close half of police stations Posted on 24th August 2011
Former police chaplain pleads guilty to possessing indecent images Posted on 26th January 2015
Man found with head injuries in Brighton. Police want to know how they cam about? Posted on 07th August 2014
A man was struck in the head by a hammer after he came to the aid of his neighbours ukcri.me/61680 Posted on 14th April 2015
Investigation underway after three men are found with head injuries in Solihull Posted on 14th June 2014