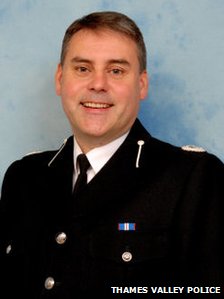 Thames Valley Police and Hampshire Constabulary have appointed a joint assistant chief constable for operations across both forces.

John Campbell will oversee joint operations for both forces

The shared post agreement was signed by both chief constables and police authority chief executives on Monday.

The JOU is based with Hampshire Constabulary and is led by Chief Superintendent Chris Shead and overseen by Assistant Chief Constable Campbell, who will continue to manage the Berkshire local policing area.

The position has been created for a trial period of nine months.

Assistant Chief Constable John Campbell served in Hampshire for 10 years as police commander in Portsmouth, head of operations and as a temporary assistant chief constable before joining Thames Valley Police in 2010.

The joint roads policing unit was the first element of the JOU to come into existence in January. Other parts of the unit will follow in the coming months, concluding with the joint firearms unit after the Olympics.

The formation of the collaborative unit was agreed by both police authorities in November 2010.