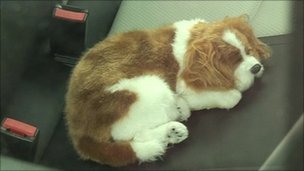 A passer-by mistook “Little Willy” for a real dog

Police in Nottinghamshire have said they will be discussing compensation for a car window smashed after officers tried to “save” a toy, stuffed dog.

Officers received a call from a concerned passer-by who reported seeing a dog left on the back seat of car parked on Church Lane in Mansfield.

The police officers smashed a window in the Mercedes and discovered it was, in fact, a toy dog.

“I know Little Willy is quite realistic and if they weren’t sure about it, they did a good thing as we don’t want any more dogs dying in the heat of a car,” said Mr Williams. 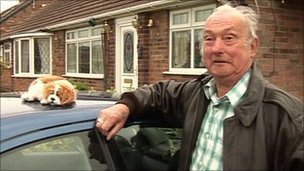 He said it cost Â£180 to repair the driver’s side window and Nottinghamshire Police said they were discussing the costs with Mr Williams.

In a statement Nottinghamshire Police said: “The call [on 26 March] was made in good faith by a passer-by.

“In this case officers believed a dog could be suffering due to the heat of the day and its life was potentially at risk, so felt there was no other option but to enter the vehicle.

“This is a perfect example of why drivers need to think about what they leave on view in their car, both in terms of other people’s perception of the objects and in a bid to deter opportunist thieves.”

Mr Williams added Little Willy would be staying at home from now on.