A uniform combining the name of a police force with a private company logo is being worn for what is thought to be the first time.

The uniforms are being worn by about 200 staff who transferred from Lincolnshire Police to G4S, including front counter staff at police stations.

The Police Federation said the uniforms – also worn by control room and custody staff – would confuse the public.

However, Lincolnshire Police said the uniforms would not make a difference.

Chief Constable Neil Rhodes said: “I firmly believe that the community is more interested in cops out on the beat rather than a small additional logo on the epaulettes of inquiry office staff.

“Staff in our inquiry offices and control room wear uniform. We’ve added the G4S logo to that uniform to identify them as partnership staff.

“They are still very much part of the Lincolnshire Police family and it’s important that the public are able to see them as such when they call in our inquiry offices.”

About 550 civilian staff employed by Lincolnshire Police Authority – two-thirds of the total – transferred to G4S on 1 April.

The security company said this was the first time it had formed a “strategic partnership” with a police force, and the new uniform reflected this.

A G4S spokesperson said: “It is worn by employees working in departments such as the force control room and custody as well as by town inquiry officers. 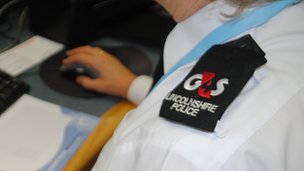 “There are no plans to introduce the dual logo elsewhere.”

Paul McKeever, chairman of the Police Federation, said the uniforms would “cause confusion in the public mind” and be less of a deterrent to criminals.

“The people who we are trying to target will know the difference immediately,” he said.

“The deterrent effect of having warranted officers is lost.”

Other police forces and authorities are considering similar contacts with G4S and representatives from 38 attended a seminar at the Lincolnshire Police headquarters this week.

Mr McKeever said he was concerned about an “explosion” in the number of police personnel who aren’t directly accountable to the public.

“I think all police forces are having to look at very radical ideas because of the low priority the government has given to police spending.

“These are some of the consequences,” he said.

“G4S aren’t doing anything wrong. They are doing what any private company would want to do, which is make profit and expand their organisation.”