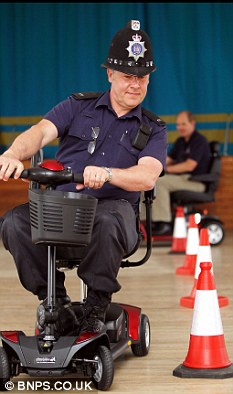 Test drive: PC Dave Williams tries out the mobility scooter course for himself, in a bid to cut accidents in Christchurch, Dorset

They have left bystanders bloodied and bruised after mowing them down as they race through the town.

The culprits? Not irresponsible teenagers or daredevil bikers â€“ but pensioners on their mobility scooters.

So bad is the problem of reckless scooting in Christchurch, Dorset, that residents have complained about the way elderly drivers ride their 8mph machines

One pedestrian was left with a bruised face and cut lip after being knocked down recently.Â

In response, the police have organised a scooter driver awareness course in the town, where almost a third of the population is of retirement age.

Pensioners are put through their paces on an obstacle course of crossings, traffic lights and cones.

Scooter salesman Mike Ruddick, who helped organise it, said: â€˜The people who tend to speed are men, who traditionally go for the bigger scooters.â€™

‘The biggest problem we have is that there is no need for anybody to have a licence, and also a lot of people who have scooters are using them without knowledge of the rules of the road.’

‘One scooter is a pavement one restricted to 4mph and then there is a second category of scooter which goes up to 8mph and can be ridden on the road.

‘You are breaking the law if you are driving an 8mph scooter at that speed on the pavement and it can be dangerous.

‘The majority of scooter drivers are reckless because they dont know there are laws in place, but then there are hundreds of thousands of scooter owners who are absolutely perfect.’

PC Dave Williams, of Christchurch Police, said: ‘There were complaints from local residents about the manner in which the scooters are driven.

‘This is obviously not all scooter drivers but some people have caused concern amongst people.’