The racism crisis engulfing Scotland Yard took a new twist yesterday as a senior officer was suspended for allegedly racially abusing a man while off-duty.

A Metropolitan Police inspector was arrested on Tuesday after an incident in Barnet, North London when the off-duty officer apparently swore at an innocent bystander.

The officer has now been suspended from duty while the case is being investigated by the Metâ€™s Directorate of Professional Standards. 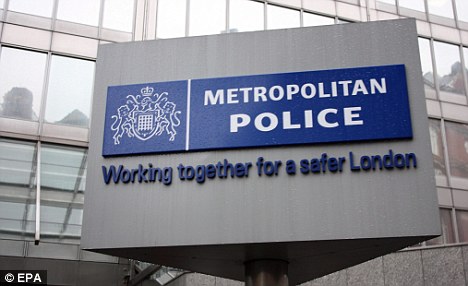 Racism storm: Scotland Yard found itself at the centre of a deepening crisis as it faces yet another allegation of racism against one of its officers

It has also been referred to the Independent Police Complaints Commission.

The allegation is the latest to emerge during a month in which Britainâ€™s biggest force has been rocked by accusations of racism.

There are now 12 reports of racism involving 19 officers and a civilian worker under investigation by Scotland Yard and the Independent Police Complaints Commission. 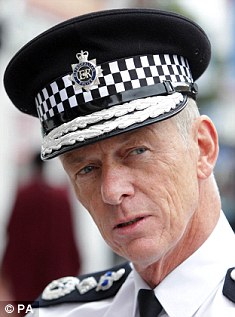 Action: Met Commissioner Bernard Hogan-Howe said there is no place in the Met for racism

A Met spokesman said: â€˜Officers from the Metropolitan Police Serviceâ€™s Directorate of Professional Standards (DPS) are investigating after an alleged racist incident involving an off-duty police officer that occurred at 7.40am on Monday, 23 April in Barnet borough.

â€˜A serving officer of inspector rank, based in North London, was arrested on Tuesday 24 April by DPS in connection with the incident.

â€˜The male officer was arrested on suspicion of a Section 4 Public Order Act offence (racially aggravated words or behaviour likely to cause harassment, alarm or distress).

â€˜He is at present on police bail and has been suspended from duties pending the outcome of the criminal investigation.â€™

The news comes just weeks after it was announced that Alex MacFarlane is to be prosecuted for allegedly abusing a suspect.

The PC was said to have been recorded telling a 21-year-old black man he â€˜will always be a n*****â€™ during last summerâ€™s riots.

MacFarlane, a response officer based in Newham, East London, has been suspended from duty since Mauro Demetrio claimed he was abused in the back of a police van on August 10.

His recording forced senior officers to confront a backlog of outstanding racism claims within the force.