Tour of Britain cycle race to end on Guildfordâ€™s cobbles 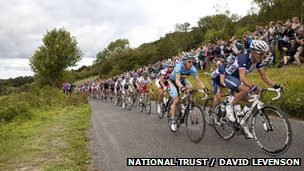 The Tour of Britain cycle race, the British equivalent of the Tour de France, is to finish in Surrey.

The final stage of the race on 16 September will start in Reigate and end in Guildford, passing through Ranmore and Cranleigh.

Organisers have described the route as the “toughest yet” with race ending on the cobbles of Guildford.

The Olympic road race and time trials will use also Surrey’s roads in July and August.

Mick Bennett, race director, said: “The route is certainly our toughest yet.”

The eight-stage race starts in Ipswich on 9 September before ending in Guildford High Street on 16 September.

BBC cycling correspondent, Matt Slater, said: “Tourist boards love it and local businesses like it as well because, if you get a start or finish in your area that’s a lot of hotels, that’s a lot of broadcasters.”

He said the rolling countryside of Surrey was ideal for cyclists.

“We can’t finish in London this year because of the strain the Olympics and Paralympics are putting on the city,” explained Mr Bennett.

“But the alternative is a brute of a day around the Surrey Hills, which has the potential to be pretty spectacular, followed by an atmospheric finish up Guildford High Street.”

Four Olympic cycling events will pass through Surrey on 28 and 29 July and 1 August.

The county is jointly hosting the men’s and women’s road races and two time trials.

Work has begun on resurfacing the Zig Zag Hill at Boxhill which forms part of the route of the cycle race.

The Olympic torch relay is also visiting towns and villages in Surrey, with the final overnight stop in Guildford on 20 July before the torch enters London.

Tour of Britain cycle race to end on Guildford’s cobbles

THE Royal Navy ship HMS Bulwark will be arriving in Weymouth and Portland waters next week â€“ as part of a security exercise ahead of the Olympics.

HMS Bulwark will arrive 10 miles off Weymouth late on Monday.

It will remain there for four days to play a part in a security testing exercise, led by Dorset Police.

Residents are warned to expect to see increased activity in the Weymouth Harbour area.