The Home Secretary was heckled this morning as she told rank-and-file officers that changes to their pay and conditions were reforms which hard-working police officers should welcome.

Officers jeered as Theresa May told them regular fitness tests, new entry requirements to ensure the most talented recruits were hired, and direct entry for experienced individuals into senior ranks should all be welcome changes.

But she added that giving officers the right to strike was “off the table”, saying: “Keeping our communities safe is simply too important.”

May also insisted it was not true that the Government was singling out policing, adding that while the 20% budget cuts were challenging, they must be seen through “for the good of our country”.

“Let’s stop pretending the police are being picked on,” she said.

“Every part of the public sector is having to take its share of the pain.”

“Broadly what we are talking about comes down to money. We are still spending each day more than we earn in tax.”

May told the Police Federation’s annual conference in Bournemouth that officers’ concerns over the Government’s policing reforms broadly came down to money, their pensions, pay and budgets.

She was greeted by officers standing and holding banners saying “Cutting police by 20% is criminal” as she walked on stage and showed no emotion as she was told: “Enough is enough.”

May’s speech was greeted with silence from the 1,200 officers at the conference.

But earlier she was heckled as she told the officers: “It is because the police are crime-fighters that we will never privatise policing.”

One officer shouted: “You already are.”

In her speech, the home secretary announced that she would extend police powers to enable officers to prosecute traffic offences where the defendant does not enter a plea or turn up at court.

“Together, these changes should allow the police to prosecute up to half a million cases every year,” she said.

“That’s around half of all cases currently heard in magistrates courts.”

Police will also be given further powers “to prosecute a wider range of low-level offences”, with the details announced later this summer.

A huge cheer and applause erupted across the conference as one federation member, Dave Bennett, told Mrs May: “Home Secretary, I believe you are a disgrace.”

He challenged May over the proposed pay cuts for new officers.

Before her appearance, the Police Federation said May’s reforms, some of the most radical changes in more than 30 years, would fundamentally change the dynamics of policing.

Last week 30,000 officers marched through London to protest against changes to pay, terms and conditions.

The last time police took to the streets, then-home secretary Jacqui Smith was ridiculed at the same conference as she was blamed for a high-profile pay dispute in January 2008.

Paul McKeever, the federation’s chairman, told May: “This is a bad deal for the police service.

“We have less resilience, fewer warranted officers, a weakened front line and a radically altered model of British policing.

“You are on the precipice of destroying a police service that is admired and replicated throughout the world.”

He added: “Home Secretary, we are seeing proposals, things being put in place without infrastructure, that will fundamentally change the dynamics of policing.

“You cannot expect officers, those who understood the fiscal situation and accepted that some cuts were necessary, to take an unfair share of the cuts and just sit there and be content with their lot.”

Shadow home secretary Yvette Cooper said the Government was cutting too far and too fast and officers across the country knew their forces were “facing a cliff edge, worried that the service to the public is falling”.

Her comments echoed those of Gloucestershire Chief Constable Tony Melville who will step down at the end of the month in opposition to the election of police and crime commissioners.

In February, Melville warned that further budget cuts put the force on a “metaphorical cliff edge” and was in a “perfect storm”.

Cooper also called for the Government to do more, not less, to help officers injured in the line of duty.

“When a police officer, seriously injured in the line of duty, is determined to return to the policing job they love, they should not be penalised,” she said.

“I think they deserve the confidence of knowing their force will back them all the way.”

A Home Office spokesman said: “As a service spending some Â£14bn a year it is right for the police to make their contribution to reducing the record budget deficit.

“Existing police pay and conditions were designed more than 30 years ago which is why we asked Tom Winsor to carry out his independent review.

“We will continue to ensure that police officers are rewarded for doing an exceptional job.”

A podium has been hastily arranged for May after aides asked for her to be allowed to stand throughout her speech and McKeever’s, rather than sitting down as she and other home secretaries have done in previous years, sources said.

But she will still stand on the stage, where the backdrop says “Cutting police by 20% is criminal”.

May was greeted by officers standing and holding banners saying “Enough is enough” and “Cutting police by 20% is criminal” as she walked on to the stage.

Prime Minister David Cameron’s official spokesman said: “Just like other parts of the public sector, we are having to find savings in the police.

“A significant part of the cost of any public service is the staff cost and therefore that is an area we have had to look at. We have had a pay freeze across the public sector, we have looked at public sector pensions and we had to do the same for the police and look at their pay and conditions.

“That’s a necessary part of finding savings and protecting the frontline.”

Theresa May was forced to address the Police Federation conference in front of an embarassing banner which read: ‘Cutting Police by 20 per cent is criminal.’ 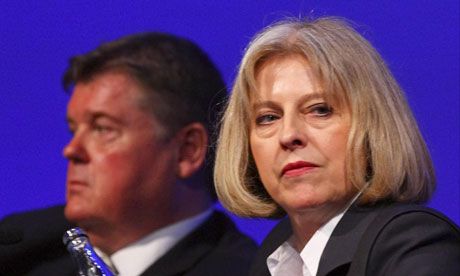