Rebekah Brooks angrily attacked police and prosecutors for dragging her friends and family into the phone hacking scandal tonight as she said she was “baffled” to face charges. 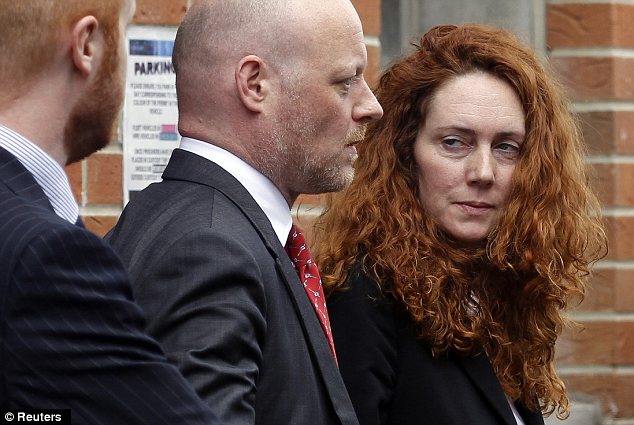 The former News International chief executive said allegations that she, her husband and four others plotted to hide evidence were “an expensive sideshow and a waste of public money”.

In a defiant statement delivered outside her solicitor’s London office, she added: “Although I understand the need for a thorough investigation, I am baffled by the decision to charge me. However I cannot express my anger enough that those close to me have unfairly been dragged into this.”

The 43-year-old and her racehorse trainer husband Charlie stood side-by-side to brand the charging decisions as a “witch hunt” against her.

Mrs Brooks said: “Whilst I have always respected the criminal justice system, I have to question today whether this decision was made on a proper impartial assessment of the evidence.”

Mr Brooks said: “I feel today is an attempt to use me and others as scapegoats, the effect of which is to ratchet up the pressure on my wife, who I believe is the subject of a witch hunt.

“There are 172 police officers, about the equivalent of eight murder squads, working on this; so it doesn’t surprise me that the pressure is on to prosecute, no matter how weak the cases will be.

“I have no doubt that the lack of evidence against me will be borne out in court but I have grave doubts that my wife can ever get a fair trial, given the huge volume of biased commentary which she has been subjected to.

“We will fight this in court.”

The couple will appear in court on June 13 alongside her former PA, Cheryl Carter and chauffeur Paul Edwards charged with conspiracy to pervert the course of justice.

Mrs Brooks was charged with three counts, including that she removed boxes of material from the News International archive and tried to conceal documents, computers and other material from the multimillion-pound Scotland Yard inquiry.

‘We are victims of a witch-hunt’: