Off-duty policemen are being paid thousands of pounds of taxpayersâ€™ money to teach fellow officers how to fire Tasers.

An investigation by police watchdog Her Majestyâ€™s Inspectorate of Constabulary found that dozens of officers from 21 forces were involved in â€˜Taser training, personalÂ  protective equipment instruction or policing skillsâ€™.

The Mail on Sunday has been told that officers from one force used their holidays and days off to earn money by hiring themselves out as private contractors to train colleagues in the useÂ  of Tasers. 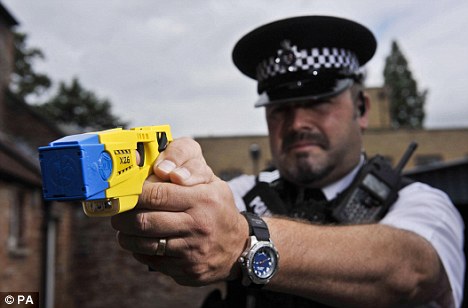 As a result, taxpayer-funded police budgets for Taser training are being drained byÂ  officers supplementing their police salaries.

Under the official trainingÂ  programmes, officers instructed in how to operate the devicesÂ  at the National Police Improvement Agency are then expected to go back to their force to train colleagues.

Peter Neyroud, the former head of the National Police Improvement Agency, said: â€˜If serving officers are being paid as if they were contractors running a separate business that would be a highly unusual interpretation of the rules about allowing a business interest.â€™

Last week The Mail on Sunday revealed that 9,000 officers were supplementing their incomes with second jobs. Officers were found to be working as ski guides, representatives of cosmetics firm Avon and masseurs to top up their incomes.

The Mail on Sunday has now been told that the Association of Chief Police Officers (ACPO) will publish new guidelines next month that will prevent officers from using their skills to earn money outside their police duties.

The guidance will state: â€˜Any undertaking of an activity using specialist skills or knowledge obtained through the police service will be deemed incompatible as a business interest.â€™

ACPO will also tighten up the application process when officers seekÂ  permission to take on secondary business interests, and strengthen its investigations and monitoring of their off-duty work.

Secondary jobs most likely to seen as unacceptable are those that rely on police skills to train fellow officers or civilians in firing Tasers or self-defence. Officers will also be barred from working as part-time firemen or taxi drivers.

The lucrative Taser training work has been driven by the rapid distribution of the devices to all police forces in the past eight years and a pressing demand to ensure more officers can use them.

More than 10,000 officers in England and Wales are now trained to fire Tasers. The initial training takes 18 hours but officers must top this up with six additional hours each year.

Thousands Raised For Skin Cancer Research Posted on 24th April 2013
Â£5k a day cost of empty fire control buildings, as budgets are cut, is gross hypocrisy Posted on 15th June 2015
Mixed Feelings Over Winsor â€˜Transfer Feesâ€™ Posted on 03rd May 2012
Burglars steal thousands from Cambridge supermarket Posted on 11th August 2014
Officers paid to train Taser â€“ A shocking piece of anti-police journalism Posted on 27th May 2012
Appeal to trace thousands of pounds worth of jewellery stolen by sneak-in thieves Posted on 23rd April 2014
Has Nothing Changed In Parliament? Posted on 01st June 2013
â€˜We are all in it togetherâ€™ Posted on 08th September 2012
Trio charged after more than Â£3,000 worth of drugs seized in Tameside Posted on 09th January 2015
More hypocrisy? AstraZeneca Board Member Donated Thousands to Miliband Posted on 07th May 2014