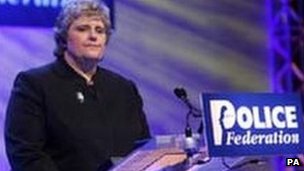 A former Police Federation chairman has confirmed that she is seeking to become Kent’s first elected police and crime commissioner.

Jan Berry, who led the federation for six years until 2008, is on a shortlist of three to be the Conservative Party candidate for Kent.

She denied there was any conflict with her previous role.

The Tory candidate will be selected in June, with the elections for commissioner taking place in November.

Ms Berry said: “I’m using my experience to try to improve policing in Kent – I don’t see myself as a poacher turned gamekeeper.”

The other two contenders for the Conservative nomination in Kent are police authority member, councillor and magistrate Craig Mackinley and Francois Gordon, a former ambassador and Kent Police’s European strategy adviser.

Earlier this month Col Tim Collins, who became known for his stirring speeches to troops in the Iraq War in 2003, quit the contest because of other commitments.

He said he had withdrawn because he would be unable to attend all of the necessary selection meetings.