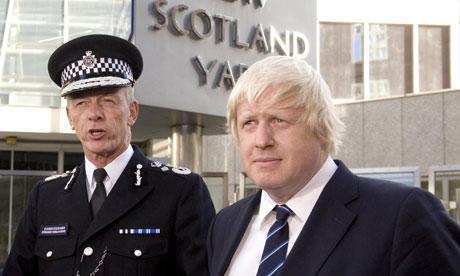 Racism within the Metropolitan police force will not be tolerated, says London mayor

TheÂ LondonBoris Johnson, is to launch a review of measures introduced to reduce racism within the Met.

Johnson will launch the review on Thursday alongside the Met commissioner, Bernard Hogan-Howe, which is due to report in the autumn.

In 2008 the mayor commissioned a “Race and Faith” inquiry looking into racism in the force. As a result of the inquiry, the Met said it would open up senior positions to people from different backgrounds, even if they had not started working as a constable.

The report also said it should be easier for staff to apply for internal promotions and transfers.

Johnson said he wanted the force to “build better relations with the communities it serves”.

He said: “The commissioner and I are in absolute agreement that racism within the Met, whose officers and staff are in a special position of trust, will not be tolerated.

“We are committed to driving forward the changes needed to ensure the Met provides an excellent level of service to the entire community.”

Hogan-Howe said: “I have made it clear that I will not tolerate racism within the MPS [MetropolitanÂ police service] and we will deal with it robustly wherever it occurs.”