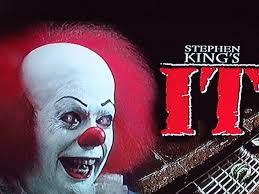 Halloween will soon be upon us with the dreadful American cover all of "trick or treat" now firmly established upon the mainly middle classes and their children.  So we middle and working classes who are preyed upon and who likely live  in houses and not five storey housing blocks  will have the required bribes near at hand to pacify the young beggars even those dressed in clown outfits. Is it a coincidence of the calendar that adults dressed a la Stephen King`s killer clown have been playing games here and in the United States; games which might frighten those of a nervous disposition?  What seems certainly not playful is the attitude of police and in this instance police in Worcester.  Assuming that said clowns are not in possession of any bladed article or similar is it really necessary to take such a heavy approach to what are probably lonely miserable misguided adults who are so pathetic that they cannot perceive that their behaviour whilst not threatening might actually frighten some folk. Do such individuals realise they run the risk of a declarable criminal record by their foolish antics?  I suppose that for the police it`s an easy collar and one more supposed crime solved.