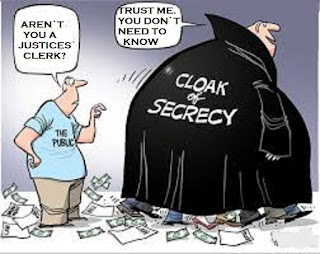 I have never been a supporter of the Howard League. Indeed whist its policy of the abolition of all custodial sentences of less than six months is in force (and it is a virtual certainty it will not change)   I doubt many J.P.s are cheer leaders for it either. Having made that point it was disquieting to read of an incident recently where the League was helpful in the case of a juvenile living in a children`s home who was detained overnight by police  on a magistrate`s warrant for the non payment of a fine. Although I personally never signed up to be such an individual, colleagues who had volunteered to be available out of court hours for such applications were clearly instructed to contact an on duty legal advisor when police arrived with such a request.

To the general reader this is another stick in the armoury of the Howard League with which to beat magistrates. Truly it is the Justices Clerk Society`s responsibility. This begs the question as to what is exactly this so called "society".  It has no web site. It sits under an umbrella site The Public Affairs Company where it is described as "The Professional Society for lawyers who advise magistrates".  There appears to be no public record of its activities. There is no doubt this appears to be a shadowy some might say  a shady quasi committee of around twenty five senior civil servants with enormous but poorly regulated  power.  And as with similar such groupings it makes sure when the fan is struck by fecal matter its name and purpose remain unsullied.

Nonsense (i) Posted on 11th September 2014
DO J.P.s HAVE THE CAJONES? Posted on 05th December 2015
HOWARD LEAGUE IS NOT QUITE PREMIERSHIP STANDARD IN THE STATISTICS LEAGUE Posted on 24th April 2013
BEHIND OPEN DOORS Posted on 15th March 2013
Own Goal Posted on 08th August 2013
The Vice Tightens Posted on 15th November 2013
Lords help us! Posted on 25th July 2014
I Knew It Would Happen If I Waited Long Enough Posted on 22nd January 2014
VIDEO: Life sentence for Norwich rapist Clive Howard ukcri.me/61910 Posted on 20th April 2015
BERWICK NEWSPAPER CONFUSES NEWS AND OPINION Posted on 29th April 2013