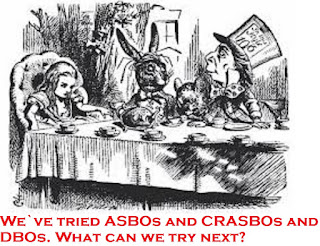 On June 21st I posted on what I believed was the first ever application for a criminal behaviour order [CRASBO] I wasn`t very enthusiastic at the time and my opinion has not changed.  Just what sense does it make to exclude a scumbag from one borough for five years or five days?  It is beyond belief that our law makers can follow the discredited failings of ASBO legislation with this.  Some might say that the sanction of custody if the CRASBO is broken warrants in itself this disposal. The same sort of thinking informed Drinking Banning Orders. I would opine that either punish the offence per se appropriately or not but do not displace it for another area to repeat the exercise. This is Alice in Wonderland law enacted by the Mad Hatter.