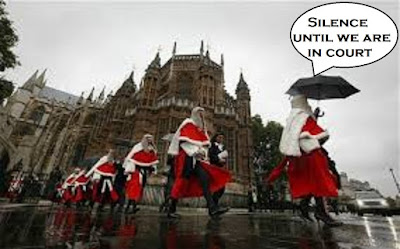 I posted recently on the Lord Chief Justice`s opinion that prison numbers must be reduced by making more use of community sentences.  He is reported as saying he wanted tougher such sentences. What he meant by "tougher" only he knows. I can recollect when the term "community payback" was used and printed on the back of high visibility jackets of offenders sentenced to work in the community.  Anecdotally it became a badge of honour for young villains. How can a probation service totally "transformed" by a previous best forgotten Justice Secretary cope with an increased workload and yet maintain efficiency and competence?

LCJ has now pronounced on the McKenzie friends issue; a situation brought about directly by the unavailability of legal aid for thousands of defendants in the criminal courts and litigants in the family courts. I last commented on this topic in October. It is generally accepted that at least for the present senior judges should avoid becoming involved in matters political.  But must we always wait until such an individual is retired on his/her substantial pension and feels free to hit the headlines with what might or might not be subject matter long overdue for discussion in the public sphere? Sooner or later especially in the light of controversy over Article 50 judges must be told to shut up or be allowed to comment under agreed strict conditions.  The current noises off when judges skate on political and judicial thin ice are not a healthy way to continue.