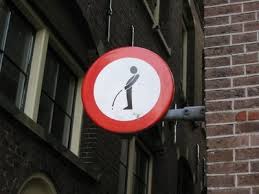 Local councils are forever juggling services with limited and sometimes reducing amounts of cash. Some have on line forums where tax payers can offer their preferences as to which services can manage with reduced funding.  As such a tax payer I think I might have been removed from the local list after my answers might not have satisfied the pre determined targets. Be that as it may the City of Chester has a knack as I posted October 27th for making itself newsworthy for all the wrong reasons. In order to re-allocate limited cash amounts the city council closed all but five of its public conveniences and agreed with some  local retail businesses that those with bladders at bursting point could relieve themselves on their premises without an obligation to spend even so much as a penny. All well and good but after these shops close in the evening their facilities are unavailable with the remaining council run loos also closed.  The result is as plain as the noses on the faces of the local worthies of that ancient city.  When the pubs and clubs are shut relief beyond belief is obtained in as private a location as public spaces allow and in Chester that is often the ancient walls built to keep out the barbarians. Miscreants sniffed out by the local boys [and girls] in blue were offered an opportunity to tour such places to immunise them against repeating the offence and thus avoid a fine or court appearance.  That remedy seems now to hold no water. Councillors in their wisdom have decided that the walls be coated with a splash back paint to deter such activities.

Perhaps they should admit defeat taking the lesson of Clochmerle (published in France 1934 and BBC TV 1972) in how not to proceed and provide 24 hour facilities for their fellow citizens instead of the superficial satisfaction of such slippery sanctions.