WAS THIS MAGISTRATE A MUPPET?

When I was appointed a chairman I recollected the wise words of a colleague, "Don`t get to love the sound of your own voice".  And how true she was.

As a bench chairman when you are speaking generally no other voice or interruption is permitted unless perhaps the legal advisor is making a salient point.  When a bench decides to sentence outside the Sentencing Guidelines it is appropriate to make clear reasons for so doing.  These should be logical and significant and directed to the specifics of the offence and/or the offender.  I find the the report of a driving whilst disqualified case at North Wiltshire Magistrates Court on Thursday somewhat disjointed insofar as the chairman`s remarks related to the situation.


"If we followed our sentencing guidelines you would lose your job," she said. "I really want to give you a lecture about being honest with your employer and if you had been honest you might not be here in the first place.
"We are going to go against our guidelines with huge reluctance and we will impose a community order of unpaid work of 98 hours. For driving without insurance we are going to fine you Â£353 and you must pay Â£85 in costs and a victim surcharge of Â£85."

The Guideline for this offence is copied below. 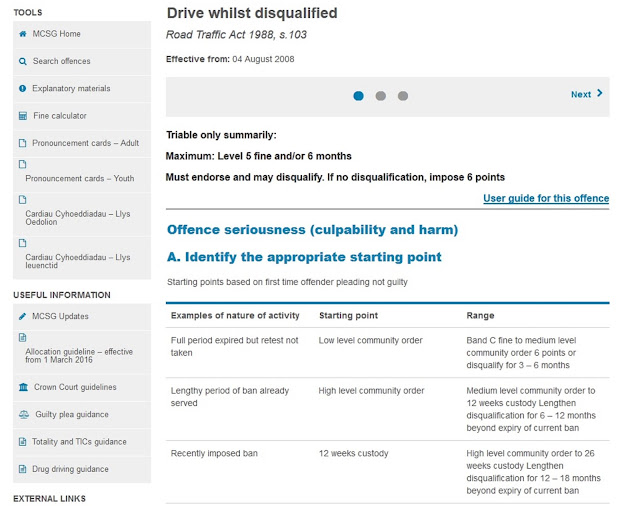 Considering he was almost halfway in to his 22 month ban the starting point would appear to be a medium/high level community order.  It can hardly be considered that his ban was "recently imposed" as the bench seems to have concluded because that is the only logical route the bench could have taken to state that, "you would lose your job" with the underlying consideration that that consequence would arise from a custodial sentence suspended or otherwise being imposed.

My opinion for what it`s worth is that the final disposal of indeed a low level community order negates entirely the the pompous verbosity of the bench chairman.  This apparent unstructured and patronising behaviour is not worthy of a bench chairman and would be another reason for some lawyers to conclude that the word muppet is an accurate designation for my former colleagues.