JURY VETTING IS UNFIT FOR PURPOSE 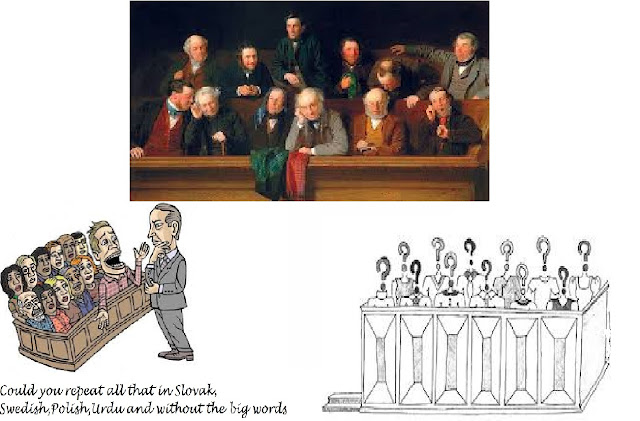 I suppose commenting on the general topic of juries and the internet is the sort of activity that fills lawyers and judges with trepidation. The mere mention of jury competence in some circles invites the arrival of the Spanish Inquisition.  Two of my posts in 2015 more or less sum up the situation. It seems now that the current watchword by virtue of Il Duce Trump is fake news.  HH Judge Graham Robinson at Grimsby Crown Court warned whoever was listening that they must be aware of fake news and to that end avoid using the internet in jury deliberations.  All this leads back to the situation where owing to the outmoded concept of "peers" every person of age  excluding a few who are insane or members of parliament or both, must serve.  Even some of those  who have had a criminal conviction must serve if ordered.  However periods of imprisonment, a suspended sentence of imprisonment or probation can warrant exclusion. I have never been called to jury service under the current regulations and excluded myself when rules were more elastic decades ago. The fact remains that some jurors with specialist knowledge or higher intellect on the one hand and those with extreme prejudices of one sort or another, low intelligence or poor command of English language on the other are sitting in judgement in life changing situations for many defendants. Their contrary abilities do not in the current jargon offer a zero sum of decision making. The time must surely be coming  when the vetting of jurors is brought up to date to cope with the modern day demands of adjudicating at the very least on the most serious indictable offences.  Currently such vetting as it is, is unfit for purpose. What was suitable in the past is no longer acceptable.