THEFT BY FINDING//VAGARIES OF OUR LEGAL SYSTEM 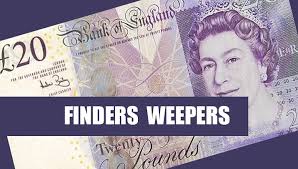 Theft by finding occurs when someone who chances upon an object which seems abandoned takes possession of the object but fails to take steps to establish whether the object is abandoned and not merely lost or unattended. During my active days the number of such cases that came my way could be counted on the fingers of one hand.   For the magistrates at North Stafford Justice Centre earlier this week their experience of such a matter made the news in many outlets.  The woman in the dock who might have been advised to plead not guilty but didn`t, told the court she had found the Â£20 note on the floor whilst shopping in a store in Blurton.  She was convicted of theft, a notifiable offence, given a conditional discharge of six months and ordered to pay Â£175 in court costs and other charges. According to a report, " Ch Insp Karen Stevenson, from Staffordshire Police, urged anyone who finds lost money to "do the right thing". "Morally, the right thing to do is hand in any found property so that the person who has lost out has every opportunity to be reunited with it." "This was someone's hard-earned money and we are committed to supporting all victims in our community." What crass supercilious nonsense is that!  To widespread disbelief senior police officers across the country have told the public not to waste their time handing in found money at police stations but to use social media to contact owner: more rubbish to excuse their "allocation of scarce resources".

For the store to call in police was as dismal display of bad management in a simple situation as can be imagined. They identified the woman in question but appear not to have asked her to explain herself or to have requested she hand the money to them for safe keeping and return to the owner if and when ascertained. How much wasted time and expense for police did this cost?  For the CPS to have considered this prosecution to be in the public interest is a fatuous over display of being seen to do something for an easy win. For the bench to impose a six month conditional discharge was being over zealous in my opinion. A token CD of one month would have demonstrated the bench`s thoughts on the circumstances. But then of course the bench might have been pushed along by the legal advisor or its own attitude to impose a punishment of deterrence. If so they exercised their duty but in a situation where another bench might have considered leniency.  Such are the vagaries of our legal system.