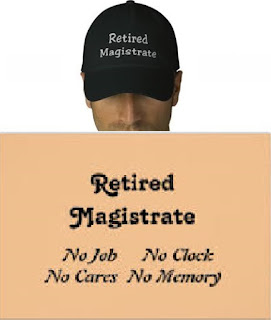 "It`s not in the public interest to send you to jail."  The public interest aspect of sentencing often gets overlooked although it`s a prime consideration for the CPS in bringing charges per se and for all sentencers.  Whether or not such an argument would have been valid in this case  if the offender were male is another matter.

Rotherham town council or whichever civic authority is involved has paid Â£1 to Her Majesty`s Courts and Tribunal Service for a local court building.  Is this a case of Peter paying Paul with tax payers` cash?  No doubt in a few years we will be told of some unusual conditions that enable somebody or other to make a few quid perhaps more easily than should have been the case.

When our families were young my closest neighbours would gather in my garden every 5th November for our home grown fireworks display. Seems that innocent pastime sensibly conducted could have ended my being a magistrate if it were under today`s heavy handed application of legislation.

The closure of magistrates` courts in Suffolk has led to predictable repercussions; a shortage of Justices of the Peace.  A very apt report in the local press tells a story that could be repeated in rural areas nationwide.

Criminal Behaviour Orders remind me in a very minor way of the actions of organisations such as the Stasi in what was East Germany. Proof is not especially needed; anonymous accounts from witnesses will suffice. Admittedly there might be some occasions when fear and distrust of police leads to individuals being bullied, harassed or victimised but in a society where policing in general had the necessary funds to operate efficiently at street level traditional methods brought traditional results where guilt was proved beyond reasonable doubt.

It is almost exactly two years since my final court sitting.  In the light of the changes in procedures in that period and contrary to what I thought at that time I really do think I`m pleased now not to have to preside over a magistrates` court where the rights of defendants especially the poor, tired huddled masses are being eroded.