THE CPS//QUANTITY INJUSTICES OVER QUALITY JUSTICE 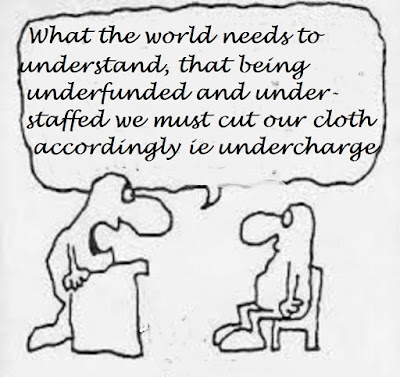 Everybody likes to win whatever the competition. The anodyne statement that "It`s the taking part that counts" is often just an excuse for losers. Organisations of all sizes and complexities will always seek to demonstrate that their performance in one way or another is the best or is improving at such a rate that confidence in its ability to do whatever it`s supposed to do is or has improved. Business, academia, trades, professions etc etc all provide statistics and/or analyses to indicate their success or to provide reasons (excuses) for a poor or unfulfilled performance. Nowhere IMHO is this approach more seriously undertaken than at the MOJ.  It might be my imagination or incompetence but I have the clear impression that there are now fewer statistics published on dealings at magistrates` courts than in years gone by. For sure there are tables on courts` efficiencies and timeliness but I have today found it impossible to source numbers of defendants and convictions on charges of common assault; a summary offence with a maximum sentence of six months custody.  Assault occasioning actual bodily harm is an either way offence with a maximum sentence at crown court of five years custody. Sentencing Guidelines are available here. As all who work in the courts` system will probably know already there is a marked tendency of the CPS to undercharge.  Nowhere is this more apparent than in the aforesaid matter of "assault". Two reasons are responsible; charging common assault in the lower court is very much cheaper than taking it to crown court and secondly the chances of a conviction are greater simply because a "serious" matter charged as a lesser offence will more likely elicit a guilty plea or the facts are more likely to be proved. The result is that hundreds if not thousands of victims are cheated of seeing their assailant getting his just rewards and as a corollary offenders are much more likely to be less limited in their venom and aggression in the full knowledge that if they are caught and convicted the punishments will be relatively minor and certainly not appropriate for the degree of violence employed.

Paul Gascoyne; Gaza, a former highly rated international footballer with a sorry record of domestic violence and inebriation as an alcoholic leading to severe mental disorders was, last year, the subject of a viscous assault which caused severe injuries. The offender pleaded guilty to common assault. The report is here. My question is whether or not such an assault was far in excess of common assault. Should it have been charged as the more serious and consequential ABH with the possibility of an initial not guilty plea leading to an expensive crown court trial?  I leave it to readers to make their own conclusions but in my opinion this is a truly awful example of my opening sentences of this post. The CPS sacrifices quality justice for quantity injustices.