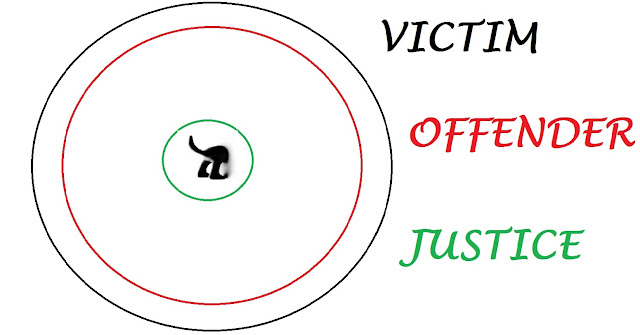 The tail is wagging the dog. We`re all familiar with this idiom. Various definitions are as follows with subtle differences amongst them:-

I would suggest that the latest announcement today from the MOJ that a further group of offences has been brought into the category of those where a lenient sentence can be appealed; those which are terror related, reminds us that a situation exists in our sentencing structure which clearly demonstrates the meaning of any of the above definitions.  Until thirty years ago judges  sentenced according to their interpretation of an offender`s culpability, harm caused to victim(s), previous convictions (if any), employment and domestic situation, provocation and any factors brought to their attention by the defence in mitigation such sentences being subject to appeal at a higher court. From 1988 the numbers and types of offences for which there is a basis for appeal to increase the sentence has steadily increased.

I have not previously given this situation much previous thought. Of course the right for an offender to appeal against conviction or sentence being too  severe is a certain safeguard against injustice but is there not an argument that a reverse right for the appeal court to increase a sentence on behalf of an argument by the state (the CPS) an indictment of a sentencer`s error and/or misunderstanding of the law?   In the event of such a position should there not be an inquiry of some sort into the competence of the sentencer; after all if eg a surgeon makes an error of professional judgement resulting in unnecessary problems for a patient or a pilot fails to follow protocols there is usually good reason to ask why.  When that right of appeal is extended to victims I am coming to the conclusion that this is a step too far and is a political act of appeasement rather than inspiring greater confidence in the criminal justice system. The classic example is the continuing support for the reintroduction of capital punishment although not necessarily within its previous guidelines.  A highly reputable 2014 poll is reproduced below although certainly it can be said that there is no clear majority for such a change and no ability for it even to be considered until we have left the EU. But it illustrates a principle of victims being being given a voice on punishment.

To sum up, as the lawyers would put it,  if judges fail in their professional requirements to sentence according to all the facts in front of them in the view of the state ie they have been too lenient, they should be admonished. Government is at present having it both ways; the judge is at fault professionally in being too lenient but we dare not admonish him/her because there would be such opposition from the judiciary as a whole  that that would be impossible and we must continue to throw the public a bone or two in increased sentences  to retain credibility even although logic disputes this. As a result the tail of public opinion  must continue to wag the dog of justice. 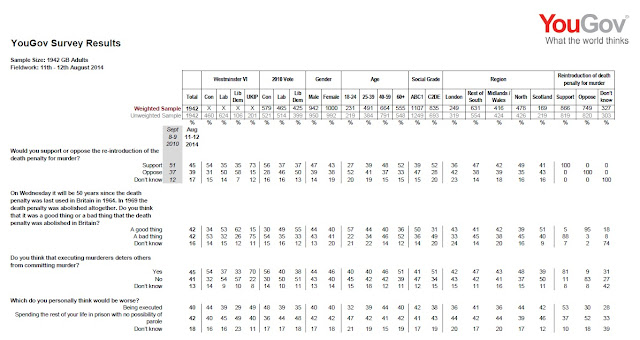