LANGUAGE IS JUST ANOTHER WORD 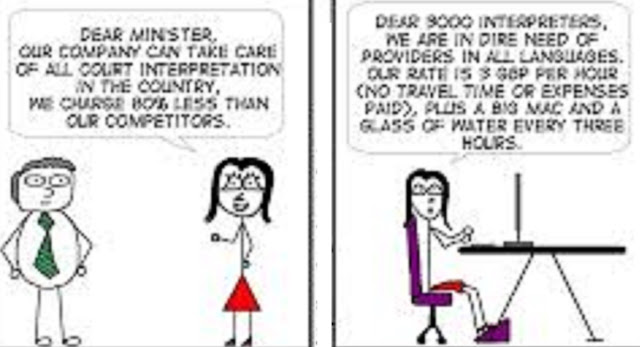 Once again the appalling state of court interpreter services is making headlines. The MOJ might laud those services in its annual reports but every failure causes misery, depression, wasted time and costs for all involved.  As usual as with so many other deficiencies emerging within our justice system and the courts in particular this can all be traced to the cost cutting begun by an over eager to please Kenneth Clarke in 2010. One of my earliest comments on interpreter services was  24th August 2013. I copy below an appropriate section.

"This is the same Capita which took over court interpreter services last January just weeks after buying out the minuscule company Applied Language Solutions  which was awarded a contract from Her Majesty`s Courts and Tribunal Service.  This process and who paid whom for how much and in what circumstances has to my knowledge been kept firmly under wraps.  Capita and those senior people at HMCTS and the Justice Ministry responsible for the award of the contract were  castigated by the House of Commons Public Accounts Committee."

"Enough has been written on the scandal involving Capita plc`s contract with HMCTS to supply interpreter services for the courts to provide future legal historians and others with evidence of how the world`s first and possibly finest and fairest legal system was brought to its knees by this and many other so called austerity requirements which have reduced the Justice budget by 25%. It would not be a big surprise if financial impropriety in Capita`s acquisition of Applied Language Solutions surfaces in a few years. Be that as it may another snippet of interpreter problems has made it to the pages of the Law Society Gazette. Notwithstanding Capita`s inefficiencies the anticipated economies have just not materialised."


On 5th February 2015 I posted on a personal experience directly relevant to the language problem:-


"Sir James Munby, president of the Family Division is not known for mincing his words.  A report in the Law Society Gazette demonstrated his difficulty in preventing his spleen being vented.  As I read the details I recollected an encounter a couple of years ago when,  at a social event,  I found myself in conversation with a court interpreter of   the Czech and Slovakian languages  qualified to standards higher than the highest requirement for the courts. Indeed she had officiated at the United Nations.  Naturally enough I discussed the Applied Language  Solutions/Capita plc situation with her.  She had previously been a freelance interpreter on court lists.  Neither she nor any single one of her few equally qualified colleagues had joined ALS/Capita and had no intention of doing so in the future. But what really showed her attitude to this publicly derided incompetent decision by government re the justice system was that she and the colleagues personally known to her had refused and will continue to refuse emergency requests issued since courts were given the opportunity to revert to previous practice. At her level she has no shortage of work.  Considering Slovakian is one of the most rarely required languages required for interpretation in the courts I am personally aware of Capita`s shortcomings despite the surface gloss of supposed improving performance."


And finally on 7th February this year  I posted on a court experience which has been seared into my memory.

I hope my reader has not been bored by all the above but it is important to recognise the common thread that links what is happening before your very eyes (with apologies to the late & great Arthur Askey) to our criminal justice system. Notwithstanding the myriad statistics showered upon us with unfailing regularity it is failing defendants, witnesses, lawyers, sentencers and all involved.  It is tragic!