BENCH CHAIRMEN SHOULD NOT "FEEL" 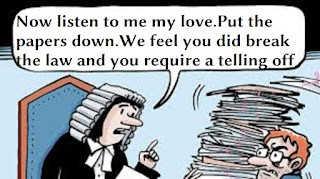 Over 2 million disabled blue badge holders have special parking privileges. Fewer than 1000 prosecutions are brought against those who abuse the system by using counterfeit badges or otherwise fraudulently try to play the system. Since prosecutions are the responsibility of local councils and those councils often appear to be more interested in using their reducing resources for other matters that are more profitable many magistrates will not have been involved in such matters. I first posted on this topic earlier this year on 23rd February. A recent case, I suppose because of the rarity and because of the affluence of the offender, caught my attention.

What strikes me about the case is not reported in the national press; one of my eyes and ears on the ground has informed me of the purported statement of the bench chairman: "We feel that you used the blue badge deliberately. We feel that the offence requires a fine but we have taken into account your early guilty plea".........(my bold)

As a bench chairman for many years I generally did not make pronouncements parrot fashion from the "book" but always made very clear the bench`s reasoning, intentions and any other considerations appropriate to the individual.  Neither I nor any other chairman with whom I sat ever used the phrase we feel or anything similar.  One might say that using those words was just a matter of that chairman`s style.  I would opine that it typifies lack of cogent thought, reasoning, common sense and use of language; factors which should be a requirement for the position.  But then this is the result of trying to train people to be chairmen and allowing them to sit for a minimum of only twenty six half days annually. It has often be said by those wiser than I that leaders are not made, they just are. Chairmen of a bench are leaders; some are capable to lead and others...................

Most professionals whatever their speciality whether it be wood carving, train driving, architectural designing or plastic surgery know well that frequency of performance is essential to retain or upgrade skills. Over twenty years ago when abdominal laparoscopic surgery was in its infancy and I required a double hernia operation I asked my chosen surgeon how many such procedures he had performed and how many had he required to redo: four hundred & three and two were his respective answers. My op went perfectly.  There is no doubt in my mind that trying to teach or train people to be bench chairmen is a difficult task. There is also no doubt that sitting on twenty six half days each year is inadequate for most to attain the required abilities to do the job satisfactorily.  It is not unlikely that poor performances as exemplified by today`s example above and others more blatant will be used as examples by those who desire to reduce JPs` role within the court environment in the not too distant future.Indeed on some social media that point is frequently made.