NOT MILK AND HONEY BUT BREAD AND GAMES 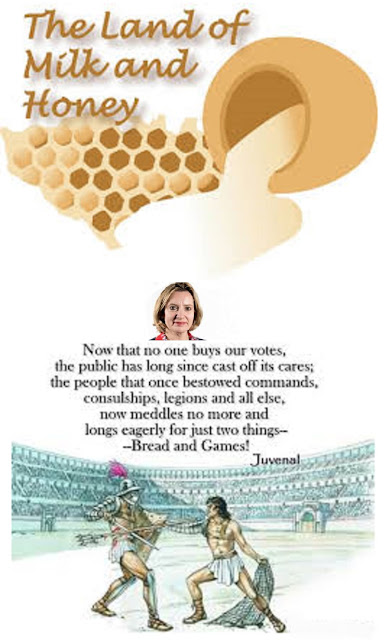 The Home Office has rarely been a direct topic of this blog.  Of course its effects on our legal system and the control of police affect us all.  In November 2011 a previous Home Secretary uttered the now famous phrase in which he described his own fiefdom as "not fit for purpose".  Many would argue that the situation is today not much changed. One fact however that has emerged from that department is that its current incumbent appears to have only limited control of what goes on under her name.  Last week an asylum seeker was flown out of the country in direct contravention of a court order known to the Home Office which was in place prior to the departure of his flight to Turkey en route to Afghanistan. There are two simple conclusions to this sorry affair; Amber Rudd knew of the court order but ordered her civil servants to continue with the deportation or she did not know and her officials did her dirty work in the full knowledge that they were acting illegally.  If the former is true she should resign and if the latter her incompetence and lack of control of her own department lend itself to the simple conclusion that she herself is not fit for purpose.

There is no doubt that the quality of the individuals at the head of government with only a few exceptions  is devoid of intellectual rigour and application. When cabinet ministers` bending rules extends to a public lack of confidence insofar that politicians lie in order to cover their arses  we are in a sorry state. It is that very perception that has allowed populists Trump in America and Corbyn in this country to garner support from a broad swathe of the population which is being led by the nose to a promised land which will soon be found rather than  being composed of milk and honey to consist of hate thy neighbour and bread and games.  Come back Nero; all is forgiven.