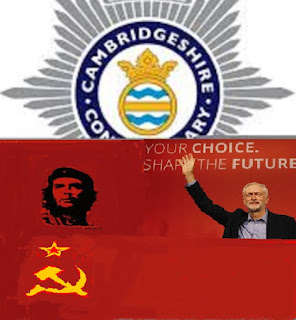 An item on the very serious (gross) misconduct of a senior police officer caught my eye today and is commented on below but before I put finger to keyboard I quickly checked on some previous posts on this topic; there have been so many over the years that if any reader is interested just type in the search box "police misconduct".

When an Assistant Chief Constable, usually 3rd in the hierarchy after the Chief and Deputy, is facing and found guilty on a charge of gross misconduct, it is not unreasonable to expect that he should be dismissed.......no ifs, no buts.  However in Cambridgshire that has just not happened the reasons given by the tribunal being as follows below which is quoted directly from "Police Oracle".  The local news media for some reason did not use the quote; an omission which I find surprising. Its version is available here.

"The chairman told Mr Malik, "Any officer of any rank  from police constable to chief constable who aspires to and achieves excellence should be entitled to call upon his service record at times of trouble and ask for it to be weighed in the balance in his favour". "

This IMHO is a dangerous precedent in the general process of discipline as in this case but in the wider field of jurisprudence in general. It was applied earlier this week in the matter of a medical student who was guilty of stabbing her then boyfriend. The judge considered that her circumstances allowed him to suspend a fairly short custodial sentence considering the severity of her crime. Mixed reactions unsurprisingly resulted on social media.

There appears to be an indeterminate area of our society where the rigid ethos of our Judeo Christian heritage has given way to a thick fudge of equivocation. I do not wish or mean that we should have a society acceptable to the Plymouth Brethren or the "Wee Frees" in Scotland. We have burned enough witches. But the Tories and their capitalistic supporters have lost sight of a humanity and common cause which has in the past served us well. They have allowed perhaps a majority of voters to be subsumed in a cultish following of an Alexander Kerensky figure surrounded by those who would make this place a nation for the few not the many by  having state control of many of our services and industries. Those old enough to remember the havoc of the 1970s had like me a supply of candles when the lights went out. Since 2010 we have been witness to the incredible naivety of Tories who did not recognise that the institution of capitalism had to be controlled and more importantly seen to be controlled: that the organs of state including police forces, the NHS and the rest had to follow guidelines that achieved respect from the public. Having just watched Corbyn`s speech to his Labour acolytes in Brighton I fear the Tories` failure is beyond redemption and the red flag will in due course be flying high.