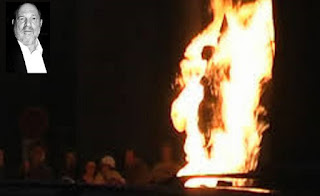 Last Tuesday October 10th I illustrated that day`s post with a cartoon of a witch burning. Indeed the last event of witch burning in these islands was that of  Janet Horne in 1722.  One might have thought that our judicial system has progressed since those days of the first Jacobite rebellion when the politics of the era pitted a Protestant Establishment against a Catholic insurgency. One would have been wrong. The last trial for witchcraft under  the Witchcraft Act of 1735 took place as recently as 1944. Yet the practice might be said to be continuing.  Indeed it could be argued that it never went away. Of course the law has changed but the attitudes and reactions against those who offend society`s norms are as hypocritical and wafer thin as ever.  Those who dare to criticise the basis of global warning rarely are able to present their point of view before a learned or even a lay public without their being ridiculed even although parts if not the entirety of their argument might harbour some elements of doubt.  So called conspiracy theorists exploit those gaps often for their own unquestionably evil ends.  Somewhere in between all these accusations and counter accusations sexual deviancies lie.  Until two generations ago it was homosexuality which was followed by paedophilia although now of course nobody can question the latter as being anything but against all our norms of behaviour.  If, as some suggest, that that behaviour is as much wired into the brains of its "victims" as is hetero or homosexuality the law will have to be re drawn.   However it is the heterosexual male predator who is in recent times the witch or more precisely the warlock that plagues us. No more clearer example is that of Harvey Weinstein, a media mogul, whose approval or otherwise of an actress`s suitability was a career changing decision. As a man of awesome power in his realm of film production he apparently escaped public denunciation until recently of his abhorrent sexual behaviour. However there is now consideration of his having various accolades awarded to him in USA and in this country withdrawn.  My point is that in his purgatorial position of unproven guilt  he is being burned at the stake of public opinion. Is this really the best or only way that we treat him and the Jimmy Saviles of this world or even the Edward Heaths?