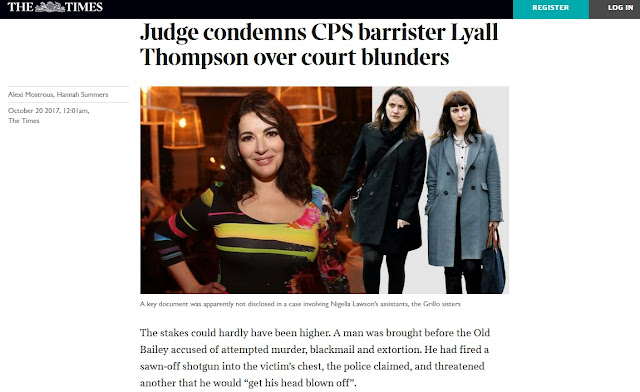 The article in today`s Times, headlined above, was ostensibly about the failings of management of the Crown Prosecution Service but within that article (behind the paper`s paywall) was the following comment from the crown court  judge HH Anthony Morris, "Are we to intervene to prevent miscarriages of justice.......and run the risk of appearing to support the prosecution, or are we to remain silent and allow possible miscarriages of justice to occur?".  I would posit that the judge`s very wise remarks apply equally or even more so to proceedings in the magistrates` courts.

In 2015 I posted twice on the topic of the inquisitorial role of magistrates; in September and November. Two years on and I feel that the questions or perhaps the problems are more acute and that serious consideration must be given at the highest level to possible changes in the training of magistrates to ensure that justice is done and seen to be done.  My reasoning is based firstly upon a  fact that is virtually common knowledge amongst court officials that the quality of prosecuting officials is variable to say the least with so many cases now being handed to non lawyers in a similar fashion to teaching assistants who were originally employed to "assist" qualified teachers but who now actually teach children in their charge. We already have PCSOs who assist in peace keeping and it is mooted there will soon be non medically qualified practitioners to assist GPs in preliminary diagnoses.  The extreme difficulty in procuring legal aid for lower levels of alleged criminality and the consequent increase of litigants in person has led to the increasing danger of miscarriages of justice in magistrates` courts at least as significant for those involved as Judge Morris`s fears in crown court where there is more likelihood of legal representation for those of low to middle income.

To return to the dilemma posed by Judge Morris, I would argue that to knowingly acknowledge the possibility of a miscarriage of justice occurring and failing to take corrective action is contradictory to the Judicial Oath:-â€œI, _________ , do swear by Almighty God that I will well and truly serve our Sovereign Lady Queen Elizabeth the Second in the office of ________ , and I will do right to all manner of people after the laws and usages of this realm, without fear or favour, affection or ill will.â€  There are those who will argue for the status quo but sooner rather than later judges themselves through their representative organisations will be required to stir themselves from their normal positions on the sidelines of judgementalism until retirement and speak now and not forever hold their peace.