WORKHOUSES:A PAST SOLUTION FOR THE PRESENT? 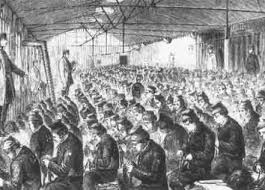 I suppose Charles Dickens could be recognised as the the Victorian who first brought to the wider public the day to day life of those whose refuge from the hard grime and grind of daily life provided under the Poor Law was the workhouse.  Such public responsibility for those whose mental or physical incapacity precluded their being able to sustain themselves in a raw competitive society especially after the Napoleonic Wars was a tribute to the benevolence of public authorities in an era where a collective social conscience was beginning to be accepted as the norm. Two million British homes were destroyed in the German bombing of World War Two. 2Â¼ million people were made homeless.  Massive amounts of money  enabled house building after the war to offer millions the opportunity  to  have an affordable  roof over their head. With the establishment of the NHS in 1948 workhouses fell into disuse and systems of national assistance were established.  How different is the situation today. Changes in civil society beyond the comprehension of those who governed in the 1950s and 60s have led to thousands of vagrants sleeping rough and/or incapable of leading what can loosely be called "normal" lives owing to addiction and/or mental health problems. With the closure of mental health asylums and reliance upon "community health" such people are being processed through the courts rather than a medical pathway. Once within that labyrinthine system they are progressed by an ever more imaginative  plethora of so called "orders".  NIMBYISM that watchword of middle class England seems to be the underlying theme of these orders. They should be termed DISPLACEMENT ORDERS if our rulers showed some honesty. They lead miscreants up a blind alley of offending, displacement and prison where, owing to the short sentences imposed, they are hardly ensconced in an overcrowded cell, than they are discharged back to where they came from.

I posted briefly on this topic in February 2014.  Is it not beyond comprehension that looking to the past can sometimes provide viable and cost effective solutions to the problems of the present?

Ian Duncan-Smithâ€™s next move â€“ to bring back the Workhouse Posted on 01st April 2013
THE CASE TO BRING BACK THE WORKHOUSE Posted on 08th May 2018
Museum for the future to tell Dorkingâ€™s history Posted on 25th October 2012
â€˜Donâ€™t judge me!â€™ â€“ judging, the past and the present Posted on 27th July 2011
Fire Suppress Ltd use Plumis Automist to comply with Approved Document B in new build in Somerset Posted on 12th August 2013
Automist solves a problem in St Andrews townhouse Posted on 07th February 2015
The importance of face to face contact Posted on 30th December 2013
Is business working now? Posted on 04th March 2014
DNA mark your home possessions Posted on 22nd April 2014
Automist provides viable solution for 4 storey Georgian conversion in Bridport Posted on 21st May 2013