SENTENCERS SHOULD LEAD OR BE LED? 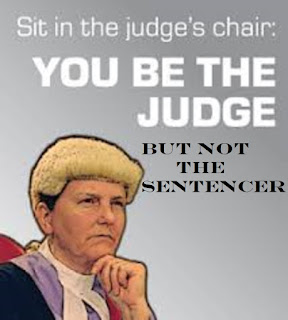 In the past I have posited the question of whether in sentencing offenders judges should be leading public opinion or following it. Since all sentencers must follow Sentencing Guidelines or explain in public if such Guidelines are not adhered to variations in sentencing can be said to be less disparate than perhaps a decade ago.  The largest increase in prisoner categories over this last decade is that of sex offenders and around 20% of prisoners can be so classified. This is of some concern to prison authorities for a number of reasons; in particular the ability of the prison estate to accommodate those who must be segregated for their own safety and the realisation that many will be unable to benefit from any form of rehabilitation.  This latter problem leads on to the fact that there is no real understanding if and/or how such behaviour is hard wired into the brain.  So there is no doubt that in sentencing such people judges often have a difficult job. As far as I am aware and I`m open to correction, no statistics are kept on the sentencing practices of judges. It is, however, an open secret, that barristers have a keen awareness of which judges can be considered "hard or soft".  HH Judge Tabor is not  of the former disposition.  He has form as far as his tolerance of offenders who might have fared very differently in front of many other crown court judges. Prison is to deter miscreants, deprive them of liberty and where possible to rehabilitate them. It costs about Â£35,000 weekly to incarcerate an offender averaging the costs of prisons of various categories.  There is substantial pressure not to impose immediate custodial sentences now that prisons are at bursting point with almost 86,000 inmates. It can be said that public protection is a factor in sentencing and many would argue that an inmate inside cannot hurt the public.  Others would of course disagree. Be that as it may Judge Tabor has again dismayed many when, last week, he gave a sex offender the benefit of the doubt and allowed his custodial sentence to be suspended.  There are some (many?) people who would be pleased if castration, chemical or surgical, was the default sentence for most serial sex offenders. In our enlightened times they are given short shrift by the same members in society who consider Leave voters to have been racist ignoramuses.  Leaders or the led........who is to tell us which way is better to reduce the criminality in our country?