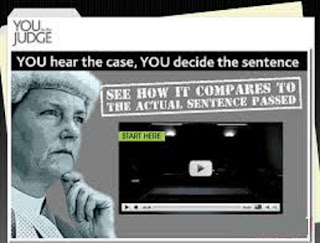 There are those who would gladly scrap short custodial sentences ie six months or fewer and those who, knowing a particular sentence demands custody, would do all in their power and find all the reasons under the sun to suspend said sentence thus following recommendations from on high to keep our prisons from mass explosions of discontent.

On the bench I presided over few occasions when a case involving firearms came to court and we retained jurisdiction.  About 15 years ago one such involved a fake firearm being waved in the face of an innocent bystander. Despite all the pleas from the defendant`s representative our legal advisor sustained our position that immediate custody in such a situation was the only appropriate disposal.  On Monday of this week the judge at Lincoln Crown Court considered suspending custody to be appropriate for a similar offence. I consider that HH failed in his duty of public protection. IMHO this is typical of the nonsense within our courts to follow government whispers to keep offenders out of jail.

That same day in the same court before the same judge HH Simon Hirst once again suspended a custodial sentence for an offender who admitted dangerous driving by ramming two police cars and driving with excess alcohol. How can we have confidence in a system where such criminality is seen to be acceptable insofar as immediate custody seems to be not just a last resort but virtually off the table for incidents where nobody is actually physically harmed?  Indeed the Howard Leaguers and their ilk in our midst would indeed retain custody only for violent criminality.  The bestiality in mankind will not be removed by such sentimentalist sentencing.  How long must we go along this path?