TOO MANY CHIEFS AND NOT ENOUGH INDIANS? (2) 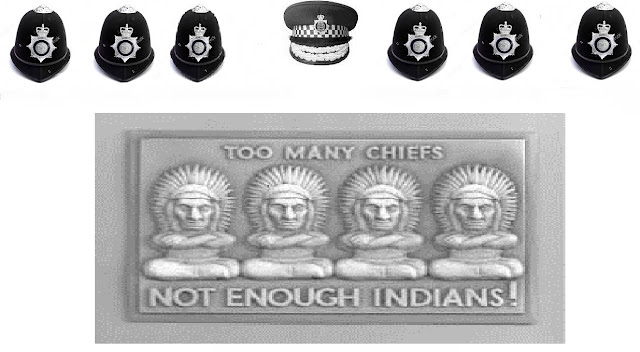 On 25th July 2013, shortly before my previous host site was taken down, I commented on the numbers of serving police officers in England and Wales and the ratios of how the various ranks were proportioned.

Although I am cautious when reading of a latest form of crime statistics which appears to indicate that the trend is up, down or sideways there is more than a little fascination in the structure of those in blue employed (in reducing numbers) to keep the peace. According to current figures there are:-

3.3 sergeants for every inspector

5.2 constables for every sergeant

4.86 constables for every sergeant

3.26 sergeants for every inspector

3.49 inspectors for every chief inspector

2.2 chief inspectors for every superintendent

1.82 chief superintendents for every ACPO rank

I have no knowledge of the internal workings or management of large organisations but it does seem that the police are top heavy at the higher ranks of chief inspector and above. The army also seems to be similarly afflicted with around 200 brigadiers and  generals  for a force of around 100,000 reducing.

Perhaps this is a historical anomaly and recruitment and promotion are trapped in a time warp? 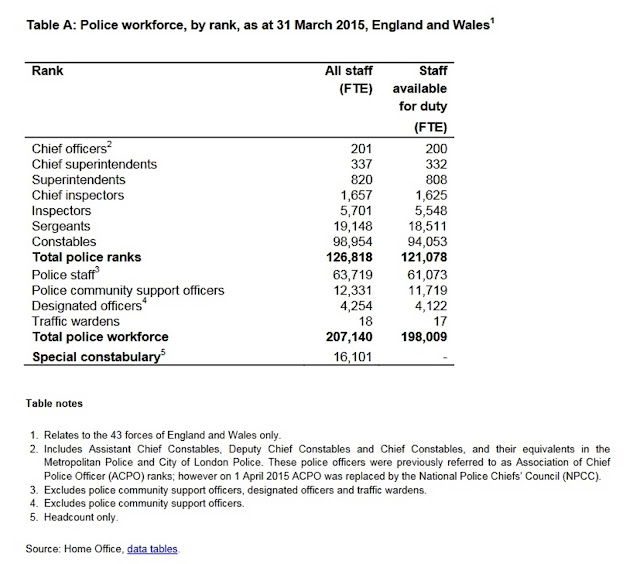 Thus the ratio of ranks is now:-

Latest figures and ratios are:-

The current ration of constables to police chiefs is now 458.56/1.   I have no idea of the optimum staffing ratios for an organisation like the police.  But I do know that with various constabularies rationing their investigative procedures public interest in these numbers is bound to become more critical.

POLITICAL TRUST! UNKNOWN BUT NOT UNKNOWABLE PROBLEMS AHEAD
A COURT REPORT IN COVENTRY LIVE BETTER NOT PUBLISHED
TELEVISION LICENSE EVASION TO BE DE CRIMINALISED AT LAST
MINISTRY OF JUSTICE IN ITS BUBBLE JUST KEEPS ON WOBBLING ALONG
PROBLEM WITH COMMENTS