CRUISE CONTROL WITH A DIFFERENCE 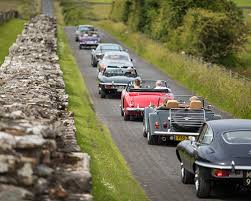 Car enthusiasts........now there`s a term that the green lobby would have bracketed in a similar group to litter louts or football hooligans.  I`m not at all ashamed to admit that a couple of decades ago I bought a bright red Triumph TR6 convertible; a classic British sportscar with an engine so simple to fiddle with that I with two left hands even managed to change injectors.  Belonging to the TR Club occasionally I joined with fellow enthusiasts to drive in convoy along some narrow country roads to an olde English pub where half a pint of cider was made to last a couple of hours whilst oily knowledge and experience was exchanged between geeks, anoraks or call us what you will. In fact there are dozens if not hundreds of similar groups and clubs nationwide doing exactly the same.

It seems that such activity has been banned in what is termed the Black Country for quite some time.  According to Halesowen News " A High Court decision to extend a ground-breaking injunction banning car cruising in the Black Country for a further three years has been welcomed".Apparently this prohibition includes "driving in convoy".

I wonder if opposition from car club members has been voiced. When police nationwide are forever excusing their failures to protect people or property to have such additional tasks forced upon them seems nonsense.  But of course there`s another point of view: give police a choice between undertaking old fashioned police duties such as preventing disorder or an easy collar..............you see where I`m going so I`ll put on the handbrake now.