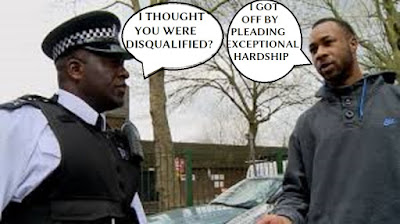 â€œThe reasons for exceptional hardship are proven because you will lose your employment and a roof over your head.â€ This is an extract from a statement made recently by a bench chairman at Manchester Magistrates` Court. Last week I posted on exceptional hardship.  Unfortunately for motoring law and the principle of deterrence as exemplified by the totting legislation of "12 points means disqualification", the law IMHO has failed in this example. The Magistrates Association has published guidance on this matter; para 4) v is of particular interest.  A newsworthy appeal against exceptional hardship being rejected was heard in Glasgow in 2012.  The website Counsel Direct has valuable opinion on the subject.

Exceptional hardship cases are heard almost daily in many courts nationwide.  At no time during my tenure was any official guidance given. Indeed my own notes were welcomed by many colleagues to assist them in their finding their way through sometimes lengthy appeals by advocates for the offenders. It is about time that magistrates understood all the factors which should be considered in such cases.