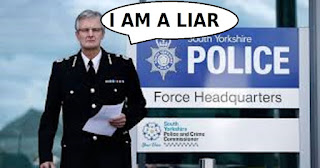 Police misconduct is rarely out of the news these days. Whether that`s because of more reports being available to the public or more actual misconduct is difficult to tell.  One thing is for sure and that is the enormous increase in the numbers of senior officers involved. Two years ago I commented at length on the situation.  We now know the scandal of the lies and cover up by those at the top of South Yorkshire Police at and following the Hillborough tragedy. Only today it has been reported that the senior detective who conducted interviews with "Nick" the informer in the Edward Heath paedophile case, Diane Tudway has been promoted to superintendent whilst she is under investigation for allegedly misleading a judge into granting search warrants to raid suspects` homes.  She is of course currently not guilty of the charge but it is disgraceful that with such a matter unconcluded she is given a promotion to such a senior rank.  Yesterday Police Scotland`s Chief Constable resigned under a cloud.  A couple of weeks ago the Deputy Chief Constable of Essex Constabulary Matthew Horne was found guilty of three counts of misconduct. At the end of last year the fourth most senior officer in Derbyshire Constabulary was suspended. Today the Chief Constable of Cheshire Constabulary was suspended pending a misconduct tribunal in April.  In September  Naveed Malik, assistant chief constable (ACC) at Cambridgeshire police admitted gross misconduct.  Former Wiltshire Chief Constable, involved in the "Nick" affair, and newly appointed as Cleveland Policeâ€™s new Chief Constable this week is being investigated for alleged misconduct. Very senior officers in the Police Service of Northern Ireland are currently under investigation.

These cases are from the last few months.  There have been many others of a similar nature historically but they are not available in a statistical form because the Home Office keeps the numbers of senior police officer misconduct cases under wraps; so much for freedom of information. There are numbers for the plods up to rank of Inspector but no more. The College of Policing can publish a 95 page report but statistics of those of high rank involved in misconduct.......NO! 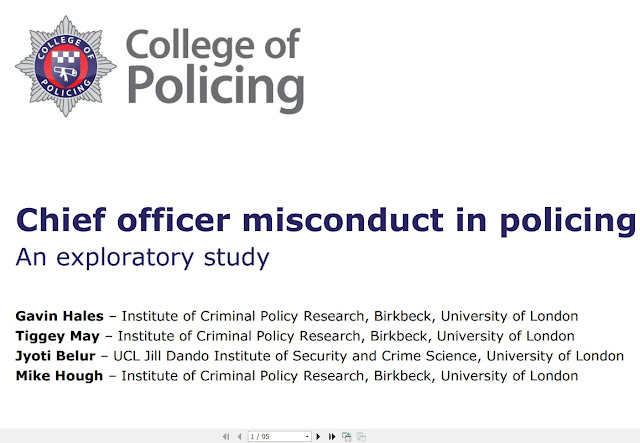 This is a matter of great public concern or should be.  Already trust in the criminal justice system with regard to the courts` process for defendants is disturbing owing to actual failings within the Crown Prosecution Service and the lack of legal aid for a majority of defendants in the magistrates` courts. Police are at the coal face of that system and in an increasingly authoritarian and "safe space" society it is paramount that they are led by people of integrity.  It will be the misfortune for us all if standards are not raised for those paid small fortunes to do that job.  However the omens are not good.  The Home Office is unfit for purpose in this and in so many other aspects of its portfolio.