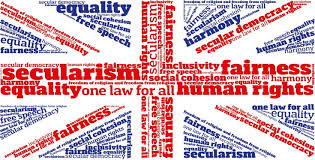 The National Secular Society has raised an interesting point about the appropriateness of a judge`s comments.  At a recent sentencing hearing Mr Justice Haddon-Cave sentenced the Parsons Green bomber Ahmed Hassan to life in prison and ordered him to serve a minimum of 34 years. As he closed his sentencing remarks at the Old Bailey he told Hassan he "should understand that the Qur'an is a book of peace; Islam is a religion of peace".

Personally I am atheistic in my approach to the wonders of life and how we live it but IMHO castigating the judge for what I consider as pertinent comments was misplaced zeal and an over reaction.  NSS chief executive Stephen Evans wrote that the judge's remarks had "undermined the principle of judicial impartiality and the universal applicability of secular law" and added "judicial office holders must be expected to treat everyone equally before the law, regardless of religion or belief". I wonder therefore if Mr Evans considers hate crimes to be unlawful pieces of  legislation or to be correct "religiously or racially aggravated offences"?  In such cases whether one agrees or not the motivation of the offender is an important consideration and is likely to increase the sentence imposed.

I will not repeat many other remarks in the report as there is a whole page on this topic on site.   Suffice to say the NSS has shot itself in the foot in this matter and will not encourage wavering  believers to its cause by this ill thought out diatribe against a judge doing his job on behalf of all of us secularists included.