FAILING JUSTICE? IT WAS EVIDENT IN BRADFORD 8 YEARS AGO 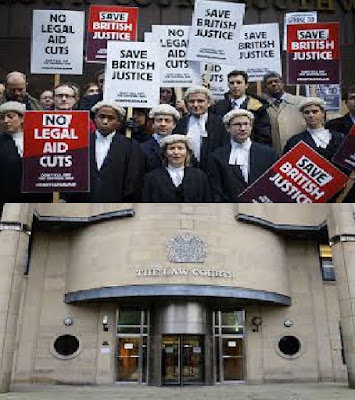 Those who inhabit our courts system have been getting more air time and media attention over the last few months than normally has been the case.  Most of the shortcomings now affecting justice have not materialised out of the ether or from rubbing a magic lamp; they began almost exactly eight years ago.  In 2009 I began this blog on a site now long since departed the cyber world but I did save all the posts. I have copied below such a post which should demonstrate that what we are now experiencing was evident in embryonic form when all the legal world was supposedly hunky dory.
BRADFORD CROWN COURT OVERWHELMED WITH TRIALS BACKLOG
by TheJusticeofthePeace@ 17. Apr. 2010. â€“ 12:10:24
The Ministry of Justice is closing Magistrates` Courts at quite an alarming rate. The driving force is the need to reduce costs. Various reasons are added to the mix to lesson the raw impact of that political word; "cuts". It is being said that crime is falling but that depends on what figures one believes. It is widely recognised that by allowing police officers and laterally uncle Tom Cobley and all to issue various forms of fixed penalties offender numbers at court are greatly reduced.
Over twenty thousand cases annually are tried as either way offences at Crown Court. It has been suggested that if Magistrates` Courts were allowed to increase their sentencing powers to twelve months custody many more matters would of course be brought within their jurisdiction. These sensible options had they been effective would have eliminated a difficulty which receives virtually no publicity; the backlog of Crown Court trials.
Officials at Bradford Crown Court are wrestling with just this problem. Instead of the usual 450 trials within the system there are 750 pending. Court manager Adrian Marshall said the situation was due to an increased number of cases being committed to them by magistrates, but the reasons for that were unclear. It seems to me, a distant observer with no inside knowledge, that there is only a limited number of perfectly obvious reasons some primary and some secondary. Of the former;
not enough courts, not enough judges, increased criminal activity. Secondary reasons are; increased numbers of defendants in either way matters opting for Crown Court trial by judge and jury instead of summary trial before magistrates under utilised Magistrates Courts which could be remedied by increasing powers as above
The court manager at Bradford Magistrates` Court is quoted as saying,â€œI canâ€™t establish a reason why there has been this increase, but the feeling I get is there is more serious crime coming through, and I think there are more sexual offences occurring.â€ That answer doesn`t fill this observer with confidence. Once again it appears that whilst justice per se is still generally of a very high standard and the practitioners involved working very hard sometimes for minimal financial reward the administration of said justice is often shambolic. However all this maladministration is usually below the waterline of public awareness. How many more Bradford Crown Courts are there?