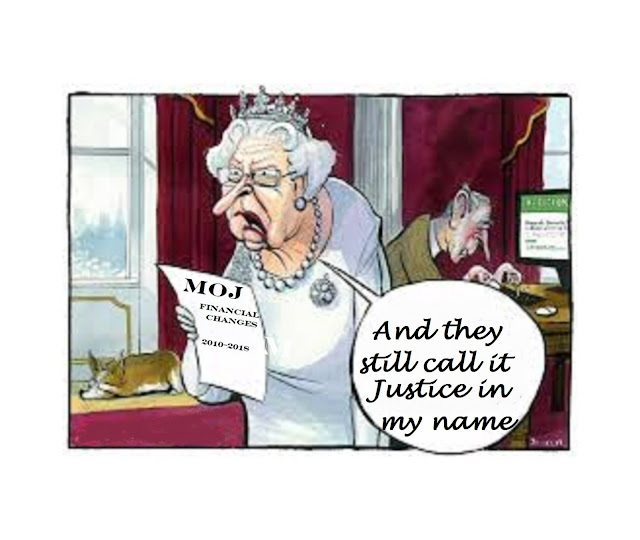 By now I would imagine that anyone remotely connected with the workings of our courts will be aware that dozens of barristers` chambers are refusing to undertake legally aided work to represent defendants in crown court.  That it has come to this is a sad situation.  Despite repeated warnings to the MOJ by the criminal bar that the financial returns especially for those recently called are such that practitioners could not continue subsidising their state underfunded work government refused to act. Now the Law Society has issued its guidance to solicitor advocates to consider carefully their position.

In the magistrates` courts where 95% of criminal cases begin and end magistrates have been aware for years of the iniquities within a system that attempted for example  to exhort unrealistic payments from defendants found guilty; 2015 Criminal Courts Charge; legislation so burdensome and ill conceived that it was repealed. Along with many other inefficiencies there was widespread concern that defendants were pleading guilty only because they feared the financial costs of going to trial and being found guilty. It is thought that as many as 20% of trials are conducted with a bench of two; a further sign of problems over the horizon. Yet J.P.s` representatives have been silent about the difficulties and problems of which they are all well aware.  Their parrot like response is that justice would be imperilled if they entered the political arena.  I would opine that magistrates have themselves allowed justice to be denied to many by their very avoidance of stating clearly and loudly that the courts system with all that that entails is not fit for purpose. They paid lip service to the closure of hundreds of courts thus increasing costs for witnesses despite the fake news published by the MOJ on increased travel times. They whimpered when that Criminal Courts Charge came into being exactly three years ago for its short lived existence.  Magistrates considering their having no financial interest in their occupation of the bench  could demonstrate that their concern for justice overrides the passive position they have traditionally taken. They don`t. They assert that justice would be sacrificed if they involve themselves in the politics of justice.  To use once often quoted phrases that once distinguished our summary justice system but no longer are guaranteed to exist...........level playing field, equality of arms etc  when the rules change changes to the game are inevitable.  The change which I hope and believe will eventually happen is that the bench in the face of unreliable CPS operatives and unrepresented defendants must come off the fence and become inquisitorial in the manner of many continental benches. Failing that there cannot possibly be justice for all as we have proudly proclaimed for many decades.