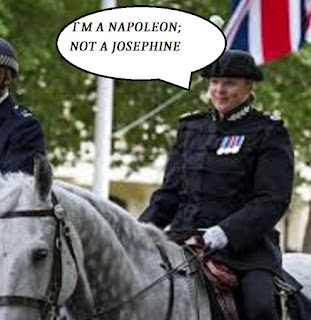 I had intended to begin by describing the topic today as an individual who had chutzpah:- the classic definition of which is that given by Leo Rosten: "that quality enshrined in a man who, having killed his mother and father, throws himself on the mercy of the court because he is an orphan."  But in the case of Maxine de Brunner of whom I last posted last Thursday May 24th that definition just doesn`t do justice to the unashamed arrogance of this woman.  When she was an Assistant Commissioner at the Met that arrogance should have been extirpated if those at the very top of that organisation had any wider concerns of their public role apart from polishing the turds within their fiefdom.  Still I suppose old habits die hard.

It seems that the aforesaid disgraced police chief who has cost her previous employer over a million pounds in trying to defend the indefensible seeks to persuade business organisations that her opinions and advice are worth paying for in the form of presentations filtered through her speech giving agent Speakers Associates.  On the basis that the old adage; a fool and his money are soon parted, applies to business I can only assume that any company that employs this person deserves to go down the pan sooner rather than later.

MAXINE DE BRUNNER: A DISGRACE TO THE POLICE Posted on 24th May 2018
POLICE BIG SHOTS GET AWAY WITH IT AGAIN! Posted on 19th August 2016
THE ARROGANCE OF POWER Posted on 16th July 2015
A TIT FOR THE TOP AT MANCHESTER POLICE Posted on 30th November 2016
Police apologise over death of Ian Tomlinson Posted on 17th September 2012
Soundtrack Listing - Episode 5 Posted on 25th July 2011
DO SENIOR POLICE DESERVE OUR TRUST? Posted on 19th July 2016
ARROGANCE Posted on 06th October 2020
Met riot police â€˜must reduce use of excessive forceâ€™ Posted on 22nd December 2012
Maxine Benson Guilty of Murdering Teenager ukcri.me/64456 Posted on 27th April 2016