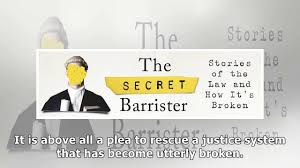 From time to time there are, in every walk of life, unheralded events which often are a more accurate indicator of the underlying situations behind those events  than any number of statistical analyses or television interviews by those in authority.  The closure of a third of magistrates courts in the last decade was justified by the Ministry of Justice on cost saving.  But that`s not the message that the dozens of weasels in the MOJ press and PR department  distributed.  Efficiency was going to be improved without any significant downside.  Travelling times for participants to, from and between the reducing available courts were manipulated, predictable detrimental effects of video court "justice" were ignored, communication problems were similarly held to be simply overcome. Add to the mix the limited possibility of legal aid for many? most? defendants and a system that once was held in high regard was seen from outside Petty France as crumbling before our very eyes.  In Shropshire an example of a relatively minor unheralded event (for non participants) being symptomatic of the underlying malaise more or less tells the whole sorry tale.

Repetition can sometimes, I confess, be a little boring but that does not necessarily reduce the underlying truth.  As a society we are failing the lowest drug addled,addicted and often  mentally impaired  members of society.  Sometimes we lock them up and sometimes we are so much in despair that we don`t.  Pressures are increasing to abandon completely custodial sentences currently available to magistrates.  We are told that rehabilitation will reduce offending for those currently being sent to custody within current magistrates` sentencing guidelines.  It is, however, because that cabinet member of supreme failure Chris Grayling emasculated the probation service on the basis of political ideology that it will be years before there will be confidence in truly being able to undertake such changes.  But we have been here before. His successor three times removed as justice secretary, David Gauke, has said that 3,111 prison officers were recruited between October 2016 and March 2018, surpassing a government pledge to recruit 2,500 prison officers by the end of this year.  What he doesn`t say is that approximately 5,000 prison officers lost their jobs between 2010 and 2016.  The MOJ instigated enormous cuts in those years ignoring the outcries from those who were in a perfect position to predict the outcome.

Just two of thousands of cases of recidivism which our current sentencing guidelines cannot cope with are available here and here.  Similar offenders  are being sentenced in every courtroom every day all over the country. It is a national disgrace. It must not continue.

There must be out of the box thinking on what can be done for those tens of thousands locked up by my former colleagues annually.  Although forming only about 4% of all those sentenced the costs to society are enormous.  My out of the brain box remedy is a workhouse designed and staffed for the 21st century.  For those interested just type "workhouse" in the search box for my more detailed previous posts on the topic.