THE END OF JUSTICES OF THE PEACE IS NIGH 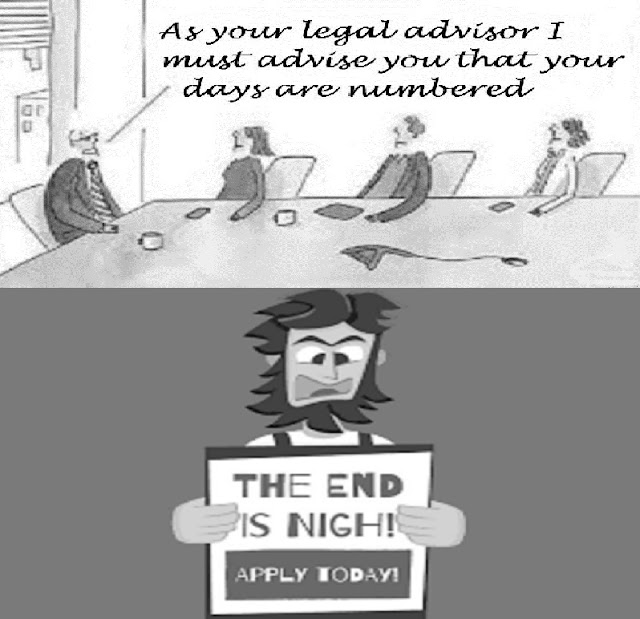 Having enjoyed the fruits and benefits of a Mediterranean lifestyle albeit including the facilities of air conditioning, superb swimming  and poolside overeating and drinking I am surprised that I have found no comment here or elsewhere on the MOJ`s seeking to appoint a "National Leadership Magistrate" the subject of my previous post. With so many local judicial areas advertising for new magistrates and the increasing retirements of those past their sell by date many benches will soon be constituted by those who have little or no knowledge of what once was the independent magistracy.  The Magistrates Association, a voluntary organisation paid for by subscription, at one time did actually appear to represent Justices of the Peace in their collisions with government.  It failed, however, owing to its articles of association in being a truly members` protective body akin to the BMA and individual J.P.s had no backing when faced with problems concerning their behaviour or words which were deemed to be against the ethos of their position as the junior members of the judiciary.  Indeed many would argue that they were held to higher standards than their seniors. Over my tenure Justices Clerks, their Deputies and legal advisors seemed to exert ever more influence on individuals in their judicial functions; functions which were and should still be for individual magistrates and benches collectively to exercise according to the law and their consciences. A classic case occurred at my court after the riots of August 2011. Pre sitting "advice" from the DJC was that eligible [either way] cases were to be sent to the crown court. My bench disagreed on a particular matter and retained the case. After the legal advisor had made that advice explicit in open court I told a packed courtroom that we were acting against her advice and that she had done her job as she understood it.  There were no repercussions although I`m unsure what the situation would be if a similar situation occurred today. It was the custom at my former court to hold three bench meetings annually where any relevant matters could be discussed informally. The DJC would normally be present. About ten years into my appointment at one such meeting we were "honoured" by the presence of the Justices Clerk; a man ruling over twelve courts. I recollect asking a question or making a point which brought said gentleman to his feet demanding discussion of that particular topic was not to be continued. Naturally I objected to his interference and persuaded the meeting that we should not be told by him when we can or cannot discuss an item on our agenda. Shortly afterwards became the establishment of the National Bench Chairmens` Forum. With the drastic decline in the numbers of magistrates beginning to be felt corresponding to a similar lack of influence by the M.A. and courts closing right left and centre Her Majesty`s Courts and Tribunal Service became increasingly active in the life of the average J.P. who was being treated as an unpaid employee as previously individual courts` control of their affairs was taken over, eg rota functions.

The appointment of a National Leadership Magistrate is nothing short of appointing a government stooge to validate the extinction of J.P.s function in our courts.  An extract from my post on the topic of June 14th is copied below.  `Nuff said!

The National Leadership Magistrate (NLM) will be the leadership magistrate for England and Wales and is responsible for leading the development and execution of the judiciaryâ€™s long-term strategy for magistrates.  The National Leadership Magistrate will serve a three-year term.
The NLM will liaise directly with the Senior Judiciary, HMCTS and external stakeholders.  The NLM will provide a voice for the magistracy at national level and communicate with bench chairs, magistrates and other stakeholders.