COURT CLOSURES ARE A PRELUDE TO ANARCHY 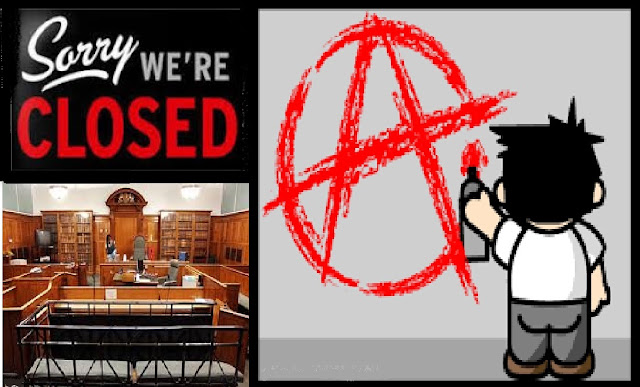 Within the legal fraternity in its widest definition there used to be a belief in the concept of "local justice".  In the centuries that magistrates` courts have been in existence "local" has been extended from parish, to district, to borough, to county, to region. Now the terms under which magistrates undertake their duties specify that their remit is "national".  When the Ministry of Justice initiated its closure programme for courts in 2010 faint objections were made on the grounds of accessibility. These objections are now at their height when the predictions of "justice denied" owing to travel times and costs made by parliamentarians and court workers have proved accurate. It was widely reported that the MOJ insisted that even for court appearances in rural areas eg Cumbria and Northumbria, Devon and Cornwall, North Wales and East Anglia  no witnesses would be be required to travel on public transport for longer than one hour.  That commitment has always been denied by the MOJ.

On March 3rd 2018 The Times published the following:-

Reforms to the justice system, including court closures and a move to virtual hearings, will have a damaging impact on access to justice, MPs have warned. In a letter to Lucy Frazer, the junior justice minister, they say the elderly, mothers of young children and those without internet access will be disadvantaged by Ministry of Justice plans. The justice select committee says that proposals flout the principle that 90 per cent of people should be able to reach courts by public transport in one hour. The plans have no â€œconvincing policy justificationâ€ and â€œappear to favour value for money over the principle of access to justiceâ€. They also criticise the â€œincreasing reliance on virtual and online justiceâ€, pursued in the absence of evaluation of pilot projects. A ministry spokesman said: â€œThis government is investing over Â£1 billion to reform and modernise the justice system, making it more convenient and providing better value for the taxpayer.â€

In 2015 the House of Common Justice Select Committee published its findings after questioning many witnesses when investigating the magistracy including those which related to travel times to courts   The situation today has worsened.  Even in 2016 the MOJ denied it had set maximum travel times to court on public transport. But the truth will out.  The situation in Cambridge this year has become a topic of further debate about the terminological inexatitude of the weasels in Petty France.  Similar noises of the real state of affairs in rural areas with court closures can be heard in Suffolk.

Like so much else emanating from this government there has come about a total non belief in the veracity of senior ministers when describing policy and its ramifications, the statements from the very pinnacle of power re Brexit being just the most obvious but the odious tendency to lie when a cover up is failing will have the most serious consequences for a population beguiled into believing that simplistic populist measures are in its best interests. That way lies anarchy and that is the way we seem to be heading.