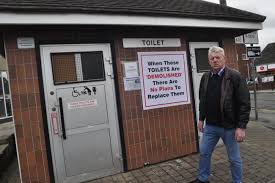 Urinating in public is not an action that I would think takes place to cause a disturbance or offence.  It takes place usually  because there are no public facilities available.  During normal office hours most town centres will have public toilets open. Whether or not these toilets are kept in a state of cleanliness or whether or not there is a charge is a matter for the local council and its tax payers.  As an example in the City of York  no public toilets are open after 8pm and indeed most close at 5.00pm or 6.00pm.  However in an obviously coordinated  report eight counts of urinating in public so far this year after a crack down by City of York Council and North Yorkshire Police have been publicised.  But in only one instance has the time of the offence been listed. In the circumstances I don`t think that was an oversight. Indeed it is quite possible that listing the stated time of that particular offence as "after midnight" was the oversight.  The underlying problem is that York as with many cities, does not provide safe clean toilet facilities when they are most needed and that is 24 hours a day seven days a week.  It is a matter of shame for those brought to court and for those who dispense council tax. Chester is another city with a similar problem.  With an ageing population still wishing to enjoy evenings out and having to cope with subtle and not so subtle changes in their physiological processes local councils must take this matter more seriously.  Synchronised media reports like the one indicated earlier are a cheap way for jobsworth people and organisations to make a lot of noise. But when police and the legal system are involved in this charade it sickens me. It might not be the BBC and Sir Cliff Richard but the only difference is the scale.