B.A. ABSOLVED OF RESPONSIBILITY FOR 12 DRUNKS HARASSMENT OF PASSENGER 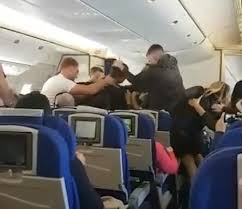 I doubt there are many reading this who have not felt harassment, alarm or distress at the behaviour of fellow travellers when a passenger on an international flight. If even one fellow passenger behaves in such a manner there is just no escape.  Many reports have been filed of pilots diverting to the nearest airport in order that such passengers can be removed from the plane and taken into custody by local law enforcement.  Of course such a diversion will inevitably prove costly for the airline and would be considered only when the captain followed certain protocols.  I have no knowledge of these but a revealing report in the Express a couple of months ago goes a long way to explain procedures to be followed.  It was therefore a surprise for me when I read today of a passenger`s failed attempt to obtain compensation from British Airways for a truly unhappy and alarming flight to Las Vegas when he was harassed by twelve football fans during said flight. It would appear that the flight crew did not follow the protocols in such a situation.  The pilot had many opportunities to divert  from Gander in Ireland, Halifax Nova Scotia and many airports in continental USA.  I hope the claimant who obviously had the means to go to law appeals this appalling decision made by Judge Paul Brooks at Central London County Court.