TO SEE OR NOT TO SEE 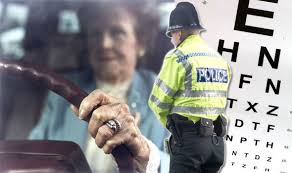 It`s not often that a news event slots into so many aspects of my life and my hobby as a blogger.  I was retired from the magistracy having reached the biblical three scores years and ten, I have recently had to renew my driving license and in a previous life I was an eyecare professional.  The news event is that police are to be given powers to immediately revoke the driving license of somebody who fails a police initiated roadside "eye test".  A first impression might be that this is a worthwhile new activity for police to be involved in but I question that.  The current requirement to ascertain if an applicant for a driving license can see properly is for him/her to read a number plate on a vehicle at 20M in normal daylight conditions.   Other requirements do not require anything other than a driver`s declaration.  Professional organisations associated with eyecare, its practice and its practitioners have for many decades pleaded with government to insist that license applicants be subjected to a comprehensive eye examination and issued with a certificate of competence on meeting the required standard before a practical driving test is taken.  Currently as far as I am aware that requirement at a minimum is still before government for those like me who must renew their license every three years.  As if police are under employed another task is handed to them.  But they are not the people who should be doing this; there are optometrists on every high street  fully equipped academically, professionally and legally to undertake this work.   By by- passing this route it is another example of this government`s choosing the cheapest easy way out to meet what is perceived a public demand. i.e. it is another public relations gimmick by the worst and arguably most incompetent cabinet minister in my lifetime......Chris Grayling; he who removed books from prisoners, he who imposed court charges which were rescinded as soon as he left office, he who has buggered up all he touches as Transport Minister.  So many commentators more knowledgeable than I have said it: Oh for Her Majesty`s  Opposition that was worthy of the name to offer us an alternative to the current lot who indeed could not have a wild party in a brewery.