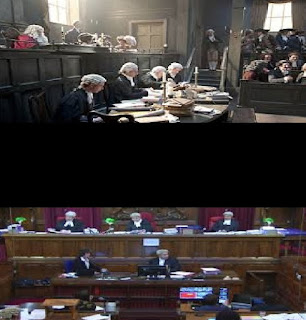 A literate population in times long past was considered a threat to authority. No clearer example was the advent of the printing press and the subsequent availability of the bible in the English language produced by William Tyndale in 1536A.D. whose efforts cost him his life. The first ever manuscript in English of the bible by John Wycliffe c1380A.D. led to his long dead bones being exhumed and crushed into powder on papal orders. With the advent of at least a rudimentary education for the masses in the middle and late nineteenth century the coming of mass media allowed sometimes lurid accounts of court proceedings to be brought to anybody`s attention for the price of one penny. Indeed court reports were a major feature of local newspapers until the increasing prevalence of a television set in most homes about fifty years ago gradually reduced the impact of the written word so far as news reporting was concerned.
From time to time MPs have debated televising the House of Commons. The first proceedings actually to be televised was the Debate on the Address in November 1989 and the first televised speech was by Ian Gow a Conservative opponent of the experiment. In July 1990 what had been an experiment became a permanent feature and it is now hard to imagine what the reporting of the political world was like without live T.V. from the House of Commons when it consisted of abridged newspaper reports mixed with opinions of newspaper editors and proprietors. Hansard was for the very few. There have been  limited transmissions in Scotland. With the Supreme Court being available live on Sky I hope this is just the beginning.
It is my opinion that those politicians charged with considering the possibilities of live programming of court are of the same mind set as their forebears of fifty years ago; the details might not be the same but the principles most certainly are especially at a time when this government like its predecessor is attempting to limit public access to legal proceedings in the civil courts and is in general under the blanket of reducing costs making life so difficult for defendants in some cases as to be impeding the maxim of innocent until proved guilty. Without doubt there are major areas of concern regarding witnesses but the principle of a public gallery open to all in 60â€ 3D and surround sound surely is the basis on which this innovation must be allowed to come to fruition however large the gallery.